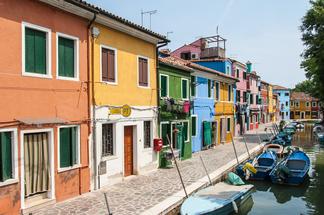 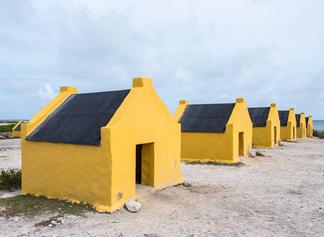 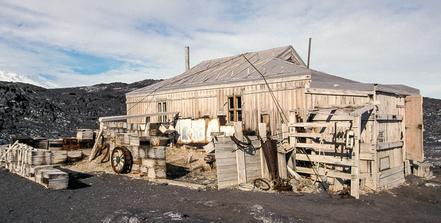 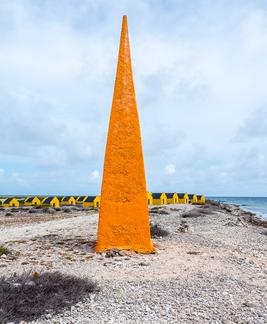 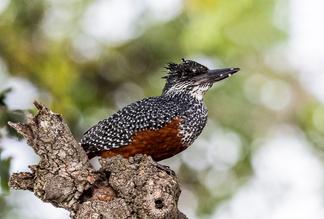 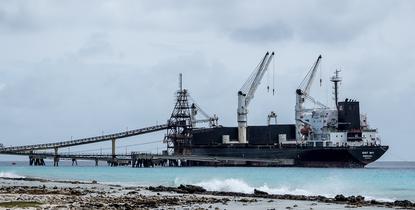 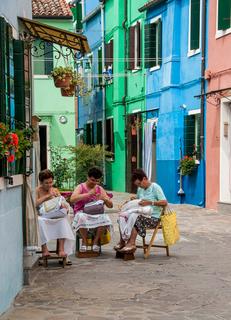 The Leeward Antilles in the Caribbean include the ABC islands of Aruba, Bonaire and Curacao. Aruba is *approximately 15 miles* north of the coast of Venezuela, Curacao is *about 40 *and Bonaire is *50 miles* away from Venezuela. My focus today is Bonaire. Every Caribbean island has beaches as does Bonaire, but Bonaire is known all around the world for its excellent diving sites. Bonaire has something else that is unique - *Salt*.
Bonaire is famous for particular salt crystals, or "sun gems," that are long, dense and heavy. Because the crystals are as big as a fist, they can be transformed into several grades to meet different customer needs. The salt produced on the island is used in multiple ways, including home water softeners, a basis for dyes used in the textile industry and processing in the petroleum industry.
Manufacturers also use the salt to produce chlorine used to purify drinking water. A third of Bonaire's salt is shipped to customers in the Caribbean, a third to North America and the rest to Europe and Africa. Clean water and clean air are what Bonaireans say make their salt so good.  The sun, arid climate and gentle trade winds make the process relatively fast. It takes only two to three months from the time the seawater enters the salt flats until the salt crystals are ready for harvest.
Let's go back in time to 1636 when the Dutch West India Company captured Bonaire and began using the island as a plantation for salt mining. Slaves worked the salt fields under very harsh conditions. Slavery was abolished in 1862 and the salt fields were privatized in 1869. The fields have passed through various owners and since 1997 have been owned and operated by Cargill. The operation today is highly mechanized but that was not always the case.
During the times of slavery, ship captains would describe the beauty of Bonaire with the colorful salt ponds, blazing sunsets, pink flamingos and the singing women who looked like mermaids carrying the salt to the ships anchored off shore. Workers would place huge wooden saw-horse like structures into the sea to build a temporary pier. The women would kneel down on one knee while two men would fill their baskets with salt. Upon standing they would hitch up their skirts, creating a mermaid appearance while balancing the basket of salt on their head, and walk the plank to the waiting boat. After dumping their load into a small boat, men would then haul the salt up to a ship anchored off-shore. The women's working song “Man pa makutu di Maria”,  translated as "Give a hand to the basket of Maria" became a lullaby sung to children of the island.
All that remains today of the slavery times are the huts and obelisks constructed in 1850. The huts served as camping facilities for slaves working in the salt ponds to collect and ship the salt. The small huts, too low for an adult to stand, served as sleeping quarters and a place to store personal belongings. Each Friday afternoon the slaves walked seven miles to Rincon town to be with their families and returned to the salt fields Sunday afternoon for another weeks work. There were also four obelisks on Bonaire which were used as navigational shore markers to guide ships coming in to load. The obelisks were painted red, white, blue, and orange.
The local language today is Papiamento, which is a language from the time of slavery. It is a hybrid language of African, Hispanic, Portuguese, English, and Dutch decent.
A.      Cargill salt hills, part of the solar salt works on the south end of Bonaire.
B.      The East Bay bulk carrier being loaded by conveyer belt.
C.      White slave huts along the shore.
D.      Obelisks & yellow slave huts.
E.      Yellow slave huts slightly larger than the older white huts.

Most people are familiar with Venice, Italy and rightly so.  Venice is not only a historic city built on the water but a very picturesque place as well. The Grand Canal of Venice, St. Mark’s Square, and gondolas are often used to represent the city.
But do you know about the nearby islands in the Venetian Lagoon such as Murano, Torcello, and Burano? Murano Island is known for its ancient tradition of glass making.  Torcello Island is full of many examples of historic and artistic importance.
Perhaps even more famous than Murano glass jewelry is Venetian lace which has its headquarters on Burano Island. Burano’s Venetian lace is made by hand and known all over the world for its superior quality.  Venetian lace made by ladies got its beginning in the 16th century. To make lace by hand is very time consuming therefore making the lace also very expensive. Burano, like Venice has its canals throughout the small town. It is an island of about 3,000 people and is also known for its brightly painted fishermen’s cottages. The house coloring system was set many years ago. If someone wants to paint their home they have to first send a request to the local government who will in turn tell them which colors are permitted for that particular lot.
Burano could be called an archipelago because it is actually four small islands connected by bridges. It is only about 4 miles from Venice and can be reached easily by water taxi or by a vaporetti. The vaporetti (think bus on water) is less expensive than a water taxi because this boat is a form of public transportation.  I took a vaporetti from near St. Mark’s Square to the island of Burano. The boat left from the San Zaccaria stop (#12), took about 30-40 minutes, and cost about 6 Euros round trip.  I remember also finding a guided tour that visited the islands of the Venetian Lagoon for about 20 Euros. I did not go with the tour because the tour only allowed 30-45 minutes at each island which was not enough time for my photography.
The biggest difference between Venice and Burano other than size is the number of tourists. I have never been to Venice when it was not crowded. On the other hand I probably never saw more than a few dozen tourists in Burano.

Kingfishers are a group of small to medium-sized, brightly colored birds in the order Coraciiformes. Today I will feature three species found in Africa. All three were photographed on the Chobe River in the Chobe National Park, Botswana in Southern Africa. All were taken with Olympus E-M5 Mark II camera body.
A.      The first is the Malachite kingfisher, Alcedo cristata which is one of the most beautiful kingfishers I have seen. This one was sitting on a reed along the river. It is a river kingfisher which is widely distributed in Africa south of the Sahara. It is largely resident except for seasonal climate-related movements. This is a very small kingfisher, 13 cm (5.1 in) in length. Taken July 16, 2016
B.      Next is probably the most common kingfisher in the park, the Pied kingfisher, Ceryle rudis. It is a couple of inches larger than the Malachite. The pied kingfisher is a water kingfisher and is found widely distributed across Africa and Asia. Its black and white plumage, crest and
its habit of hovering over clear lakes and rivers before diving for fish make it distinctive. Taken July 13, 2016
C.      Last is the giant kingfisher, Megaceryle maxima which is the largest kingfisher in Africa, where it is a resident over most of the continent south of the Sahara Desert other than the arid southwest. This kingfisher had just swallowed a fish and is sitting in a tree. It is about 18 inches in length and was taken July 14, 2016 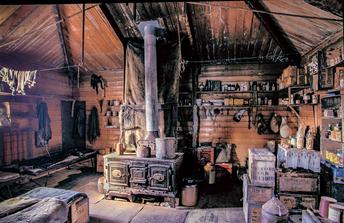 On Sunday, January 20, 2002 the Russian icebreaker, *Kapitan Khlebnikov, *sailed out of Lyttelton, New Zealand for Antarctica and the Ross Sea. The expedition operated by Quark Expeditions called this sailing "The Great Explorers", and for a good reason. We visited huts used by the early explorers trying to get to the South Pole. Those men were Robert Falcon Scott, Roald Amundsen, Carsten Borchgrevink, and Ernest Shackleton whose hut you see in the attached pictures.
This hut was built by the British Antarctica (Nimord) Expedition 1907-09 led by Ernest Shackleton. Shackleton had originally planned to land at King Edward VII Land but ice conditions prevented a landing. So, he entered McMurdo Sound and headed for Hut Point. Again ice conditions prevented a Hut Point landing so Cape Royds would have to do.
Shackleton's hut at Cape Royds looks in some ways as if the occupiers were still using it. Scott's second expedition in January 1911 visited Cape Royds and reported that a meal was on the table and socks were hanging on the line to dry. Those socks were still hanging there in 2002 and are probably there today. The cold dry climate preserves things very well so some of the food stores may very well be eatable today.
The hut was pre-fabricated in London. The size of the main room was about 7 X 8.5 m (22 X 28 ft.)  The latrine was outside as well as a stable for 4 horses and a garage for an Arror-Johnston motor car, the first motor transport to be used in Antarctica. Neither the ponies nor the motor car were very successful and both had to be abandoned. The hut walls were insulated with felt and granular cork. It also helped to have stores stacked along the east and south walls. Hams hang on another wall. Among the stores still there were tinned meats, sauces, dehydrated vegetables and bottles of raspberries, gooseberries and red currants still wrapped in straw. Entering the hut had the feeling of being in a time capsule. 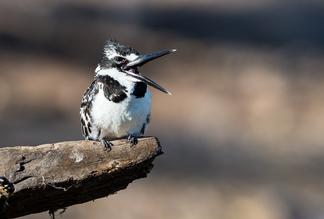 One of the many bridges 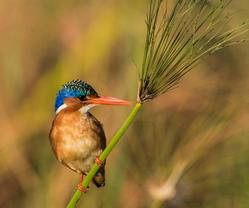 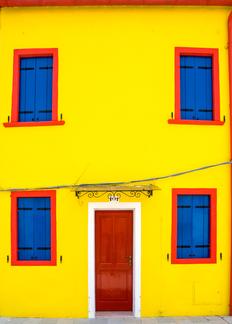 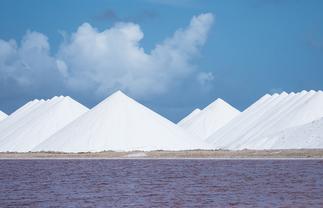 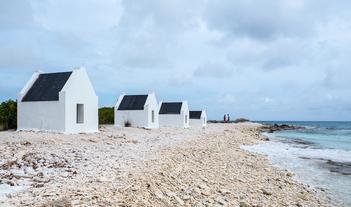 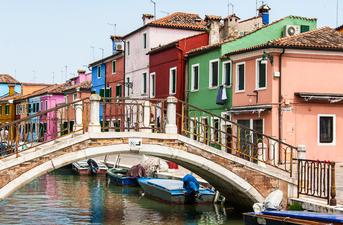 Front of a yellow house

Back to Archives
View on Mobile