I had previously shared this picture with a few of my friends, but have not used it in the “Picture of the Week” series, so my apologies to the few of you who have seen it before.
In late June when we were in Iceland the daylight hours were long. This particular night sunset was around 11 PM and our guide had taken us to a location along the Vatnsnes peninsula that might provide a nice sunset scene. It was the sea stack of Hvitserkur, a beautiful basalt sea cliff about 49 feet tall where many types of seabirds, especially gulls, and fulmars have made their nest for centuries. Their guano deposit has made its mark on the cliff, painting it white in many places and hence the cliff is named Hvitserkur which means “white shirt”.
Hvitserkur is no doubt one of the icon images associated with Iceland. Without a guide I am not sure I would have even found it. From the ring road we drove about 20 miles along the gravel road 711 and arrived at a clearing used for a parking lot. Although this majestic rock was never a popular sight or attraction among Icelanders in the past, it has become an important tourist attraction today. Down below the parking lot near the edge of the cliff is a viewing platform. We arrived just before sunset so most of our small group set up tripods on the platform waiting for the sun to drop below the horizon.
Hvitserkur has lost parts of its foundation to centuries of a battle with the powerful forces of the Arctic Ocean, severe storms, and constant temperature changes. Currently it has a unique shape some say resembles a giant dinosaur or a cow enjoying a drink from the sea. I have seen a number of pictures of Hvitserkur and most appear to have been taken from the top of the cliff or viewing platform. When we arrived it was high tide so the sandy portions of the beach down below were under water as well as the base of the sea stack. What caught my eye was the warm light on the beautiful round stones along the shore. I asked our guide if there was a way to get down to the sea. He pointed out a very steep and slippery path dropping over the edge and out of sight. As I recall, three of us decided that if we could descend the cliff it would be worth the effort. We managed to get to the bottom of the 75 – 100 foot cliff without falling.  Once at sea level I set my tripod very low among the rocks and used a slow shutter speed to soften the movement of the water. Of the many pictures that I took at Hvitserkur, I like the composition that you see here the best. It was taken after sunset. Then we made the tedious climb back to the top of the cliff. 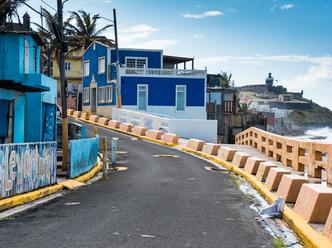 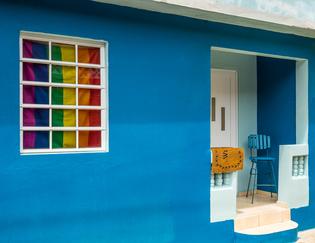 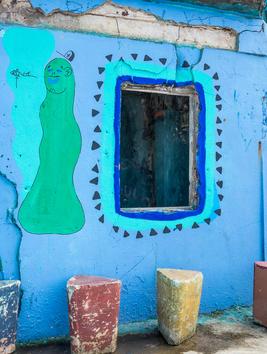 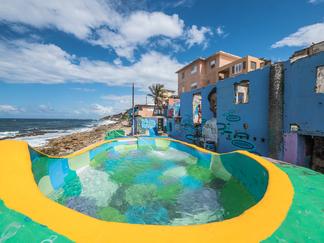 These pictures were taken in the small settlement of Speyside, Tobago located in the Caribbean north of Venezuela. Speyside is situated on the North Eastern end of the island along Tyrrel’s Bay. Speyside is little more than a scattering of houses, a school, 2 or 3 inns, and a few stores. It was late afternoon May 10, 2011 so the light this close to the equator was low and warm. As I walked along the Caribbean Sea my eye caught the peeling paint of a window frame. Stopping to study the window and the reflection in it from across the street, I was unable to find anything worthy of photographing.
For several minutes I tried to find a suitable composition utilizing the window. Two boys were observed off in the distance walking along the Bay. If they continued along Tyrrel’s Bay they might walk into the reflection I saw in one of the window panes and I might have a picture. So I quickly recomposed, refocused, and waited. Picture #2 is the result. Sure, because it was a reflection, the image is soft, but the very fact that the scene is not tack sharp seems to enhance its appeal to me. I used a slow shutter speed to show motion of the boys as they walked by. I hung around a little longer but no one else came by. One single try was all I got. 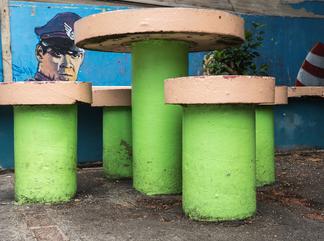 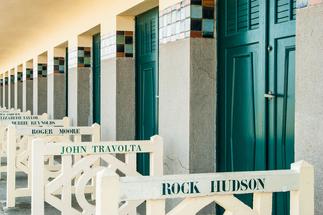 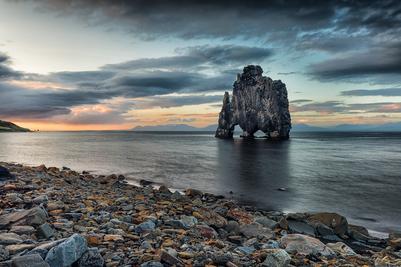 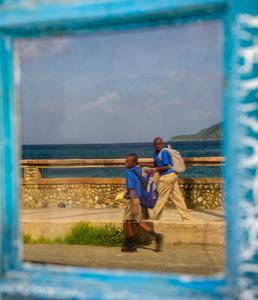 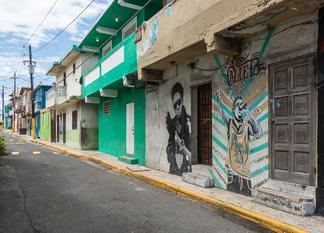 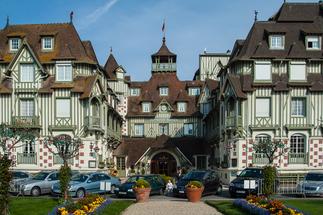 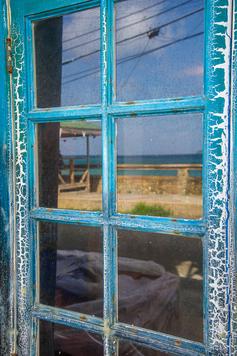 With its race course, pretty harbor, international film festival, marinas, conference center, villas, Grand Casino and fine hotels Deauville, France is usually considered the most prestigious seaside resort in all of France. Since the 19th century, the town of Deauville has been a fashionable holiday resort for the international upper class. Each summer many movie stars spend time there.
A.      The Hotel Barri're Le Normandy Deauville is a grand 5 star hotel where a standard room will cost approximately $300 per night. It was built in 1912 and is located about a block from the beach.
B.      Changing rooms along Deauville beach at 9:52 AM. Each room is named for a movie star.
C.      Lounge chairs and umbrellas line Deauville Beach. The time is 9:52 AM, it is spring so the water and air temperature are still a bit cool for people to come to the beach. 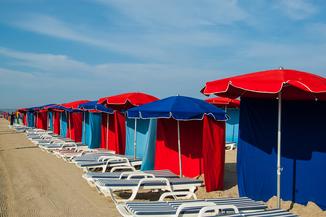 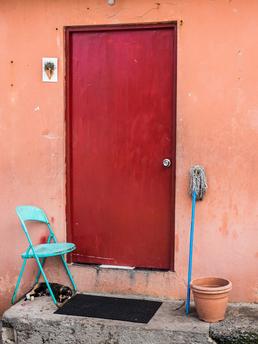 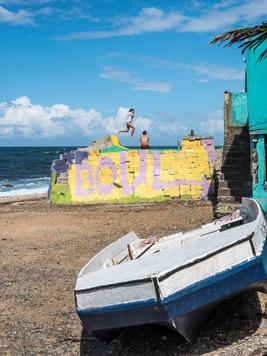 Puerto Rico has had more than its share of trouble since hurricane Maria devastated the island last September. Just this week another power outage crippled the entire island. Even so this is the Caribbean Island that I have enjoyed visiting the most. Margaret and I are often on a cruise that calls on the port of San Juan. I love to ramble in the part of the city known as “Old San Juan”.
If you walk along the street of Norzagaray that sort of connects the two old forts and look down towards the Atlantic coast you will find a large cemetery, Santa Maria Magdelena de Pazzis. Stretching along the rocky coast and just east of the cemetery is a settlement composed of a few streets and an assortment of buildings know as La Perla. For years I had seen this neighborhood from the street above but had been advised by many to stay away. This area has been called a “shanty town”, a poor barrio, a socio-economically disadvantaged community and a slum. I was also told that there was nothing of interest there and that crime was rampant.
What is it about human nature when told that you can’t do something it makes it even more appealing? From the street above I could see street art on a few of the buildings so I decided to have a closer look. As I entered what appeared to be the main street I passed an old man. I asked him about the safety of my entering the neighborhood and he gave me an odd look saying that there was not much to see but to stay on the street and do not photograph any of the local people. I did mostly abide by his advice of not photographing people, but staying on the streets was a challenge that I could not adhere to so from time to time I carefully strayed. I spent about two hours poking around on a Thursday afternoon, April 2, 2015
I like to tell a story with 1-3 pictures. For my eye, La Perla was a wonderful section of Old San Juan so it will take ten pictures to really give one a sense of La Perla. I plan to go again but have made myself a promise. For the next visit I will hire a local to serve as guide, interpreter, and security, plus I will stay longer.

Main street in La Perla
Well maintained home
Door complete with chair, cat, and mop
Concrete table and stools with art on wall behind
Window and wall
Street art on walls of roofless

Panarama of La Perla, the cemetery and Fort El Morro
Community swimming pool along the beach
View of the swimming pool from a distance including three swimmers