Color can affect mood. Bright bold colors seem to cause people to be cheery and happy, whereas dark drab colors denote a mourning persona. The psychology of color is an important tool in marketing.
So here too it is all about color. With the possible exception of the last picture, without the color none of the scenes would have even received a second look, much less been the subject of a photograph.
A blue door surrounded by a green wall. Off to the side are the red flowers of a bougainvillea bush. This is a door to a very non-descript building. On the side of the building in Phillipsburg, St. Maarten is a sign that says: Caribbean and China People Harmonial Foundation. The idea of this foundation, called the Pearl of China project, is to make St. Maarten “the Caribbean center for conventions and tradeshows” for Chinese businesses and products similar to the kind of convention business carried out in Las Vegas, Nevada.
This is nothing more than a small section of color shapes and shadows on a wall. It was at the Walter Plantz Square in Phillipsburg, St. Maarten.
Chairs in the Aqua Theater on the Harmony of the Seas cruise ship. By selecting a single row of chairs the image seemed stronger. I had a choice of which color to begin with so chose the darker blue which make the orange and green stand out.
A picture of the entrance to the Caribbean Hotel at 102 Front Street in Philipsburg, St. Maarten. 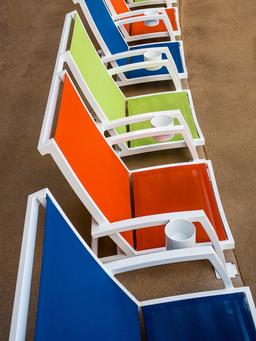 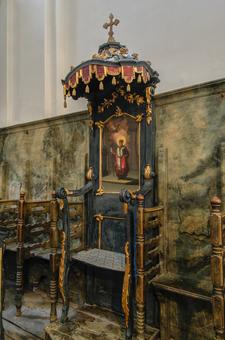 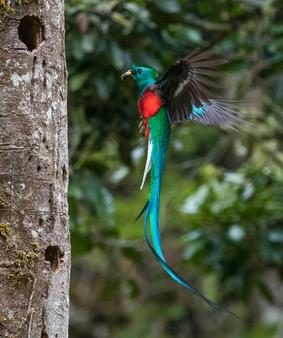 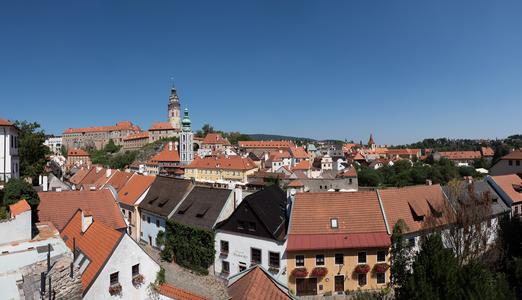 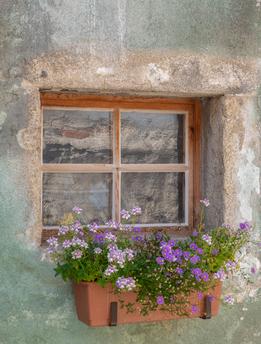 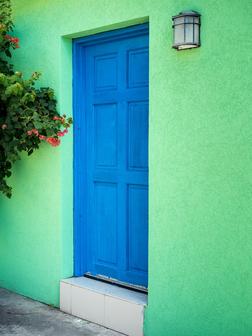 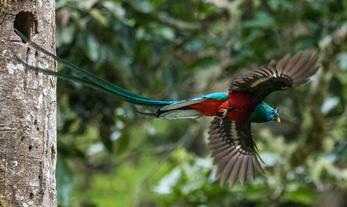 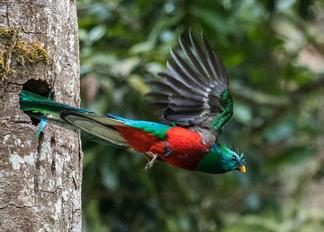 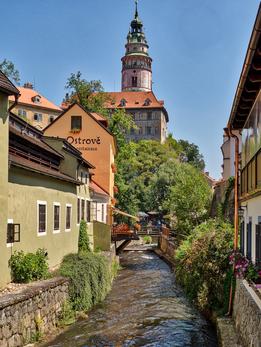 The resplendent quetzal (Pharomachrus mocinno) was found near the Paraiso Quetzal Lodge in Costa Rica. The quetzal is a member of the trogon family which lives in the lush and very moist rainforest zones. With the male’s long tail feathers it is a prize bird for birders from all parts of the world to see. Many consider it one of the world’s most beautiful birds. They can be found in the mountainous tropical forests of Central America where they eat fruit, lizards, and other small creatures.
While the females share the brilliant blue, green, and red coloring of the males, the males are more vibrant and have twin tail feathers of up to three feet in length. Using very powerful beaks, they hollow out a nest hole in rotted trees. When the male goes into the nest his tail is so long that it sticks out the hole.
The resplendent quetzal is the symbol of the nation of Guatemala and their currency is also called the “quetzal”, but this beautiful bird is not pictured on the currency bearing its name. Unfortunately these birds are threatened in Guatemala mainly because of the disappearance of their tropical forest homes. Costa Rica, however, has protected land to preserve habitat for the quetzals. This pair is feeding chicks in the nest.
Male flying into the nest with a cashew in his beak.
Male looking out the nest hole prior to taking flight. See his tail feathers sticking out of the tree.
Male flying from the nest and his tail feathers are more in the nest hole than out.
The male is several feet from the tree and his tail feathers are still at the tree.

Recently Margaret and I took an Avalon Waterways riverboat from Budapest, Hungry to Amsterdam, Netherlands. On August 1st the Avalon Expression made a short stop at a place called Brandstatt, Austria. Passengers had three choices: stay onboard and continue sailing up the Danube River to Passau, Germany arriving in the early afternoon, or a day trip to Salzburg, or a day trip to Český Krumlov, Czech Republic. I had been to Salzburg but had never even heard of Český Krumlov so off I went. Margaret chose to continue on to Passau.
Český Krumlov was a little over an hour’s drive by coach and is a city in the South Bohemia region of the Czech Republic. It is a small town built in and around the horseshoe bend of the Vltava River, and overlooked by its 13th century castle and round bell tower. Within the castle is the Church of St. Vitus, a Gothic church dating back to the 15th century. It is most unusual for a town of its size to have such a large castle. In fact it is the second largest castle within the Czech Republic.
I was told that nice panoramic views of the town could be seen and photographed from the castle bell tower or the castle garden wall. I was on my way when I realized that it was a bit late in the morning for a photo from that direction since I would be more or less facing into the sun. Changing plans I began exploring the small cobblestone lanes and buildings dating from the 14th to 17th centuries. During the Communist era of Czechoslovakia, Český Krumlov fell into disrepair and was all but forgotten. After the Velvet Revolution of 1989 the town began to slowly recover and repair its Gothic, Renaissance, and Baroque styles buildings. Since 1992 the town and castle has been a UNESCO World Heritage site. In this week’s selection of photos you will see:
Panorama of Český Krumlov from just off Kaplicka Street.
Entrance gate to Český Krumlov and part of remaining old city wall.
Radnioni Street, a commercial street with shops and cafes.
Vltava River flowing through the town.
Window w/flower box. I liked the abstract reflection in the window of the wall across the narrow lane.
A local artist had some of his work in the small courtyard adjoining his gallery such as this bench. Notice the thorns built into the bench, the crooked backrest and crooked window behind. I liked the way the vines framed the entire scene.
Masné and Šatlavské Streets was perhaps the hardest one to capture. This scene is just off of a major street. That particular day there were several buses of Chinese tourist and it seems that many Asian tourists like nothing better than to take selfies in photogenic places around the world. Once the first person spotted me trying to compose my shot. she charged ahead of me to get her shot and for the next 10 or 15 minutes there seemed to be a never ending flow of people running down this lane who posed and then posed some more. It was like I was invisible to them. I waited but not patiently until finally the Asians left and a local person with her dog walk into the scene. (It was 2:04 when I finally got the shot. We were to meet at 2:15 to return to the coach so time was running out because I was some distance from our meeting place). 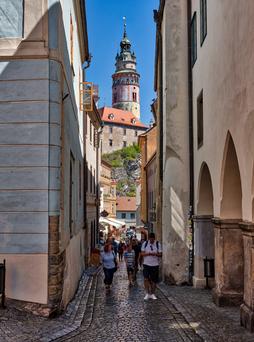 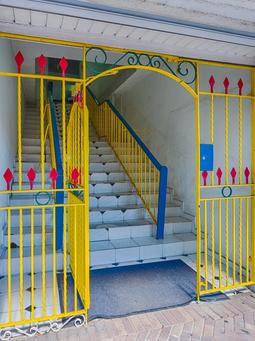 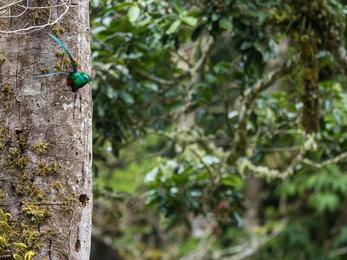 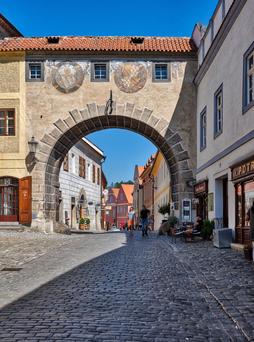 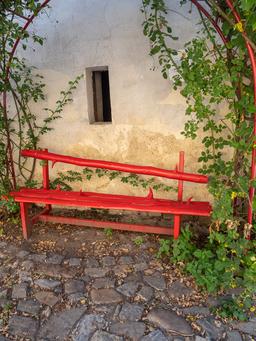 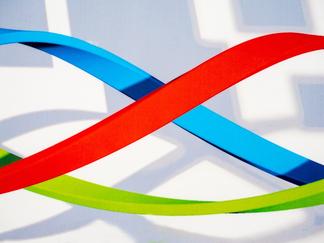 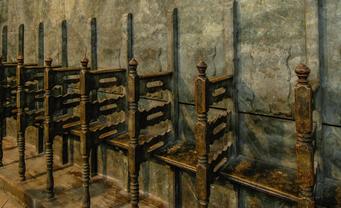 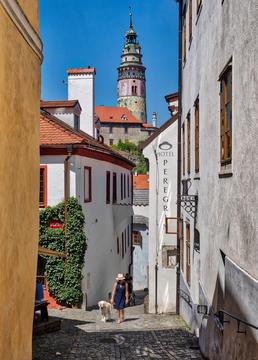 This is the Annunciation Church, a Serbian Orthodox Church, c. 1873 in Szentendre, Hungry. Szentendra is a riverside town in Pest County not far from the capital city of Budapest. Did you know that the towns Buda and Pest on separate sides of the Danube River combined in 1873 to become the greater city of Budapest?
There are three main parts to an Orthodox house of worship. The Narthex is where one entered and was historically the place of the penitent and the catechumens. The center where the pews are placed is the Nave and is the place of the faithful. The Sanctuary is the place of the clergy and where I took these two images.
For the most part I was the only one present and spent about a half hour photographing the interior of the church with the aid of a tripod. Today I am featuring only two of the many images that I captured. While I am not sure, I believe (A) is the Chanter’s (also called the cantor) stand. Along the same wall is a row of seats (B) which is used for the choir. I did sit down in one and it was as uncomfortable as it looks. What caught my eye was the wood finish which is so beautiful that it makes the photograph look more like an oil painting.