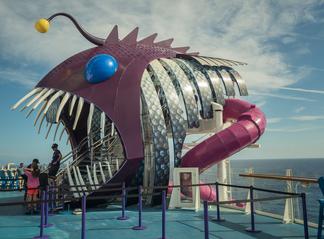 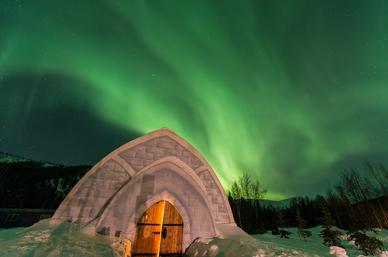 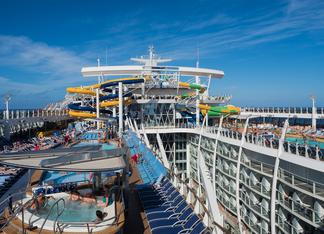 *Harmony of the Seas* 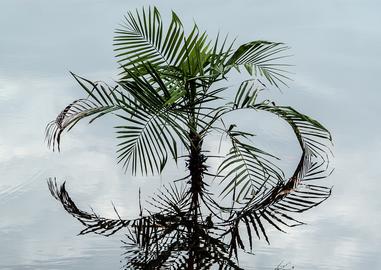 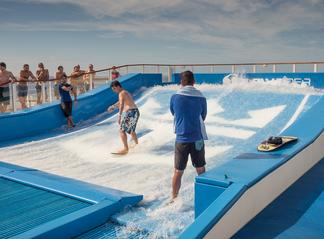 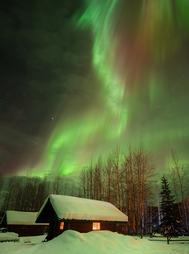 Harmony of the Seas docked in Nassau, Bahamas

While I have shared some of this information and at least one of these pictures with a few of you, it was not as a "Picture of the Week". I am also sending these pictures in memory of Stuart Westmorland. This was a Joe Van Os Photo Safaris trip with co-leaders Kevin McNeal and Stuart Westmorland. I was sad to hear that Stuart passed away July 18, 2016 after a battle with leukemia. Stuart, only 58,  was an excellent photographer and friend. He will be missed.
There are various places around the world where the Northern Lights can be seen. Probably the places that are the most popular are Alaska, Iceland, and Norway. I was told by some experts in Alaska that the winter of 2015 was especially good for the Northern Lights. There seems to be a 7-year cycle and 2015 was a peak showing. The pictures that I have attached were taken near Fairbanks, Alaska and about 60 miles to the north at Chena Hot Springs. While we did have active skies, the weather was brutal. When I arrived in Fairbanks, the temperature on a sign near the airport showed -22 below zero Fahrenheit that afternoon. Little did I know that this would be a high temperature for the next five days? It got as low as -39 degrees which is not all that unusual for Alaska, but it was mighty cold for this Georgia boy.
So what exactly are the Northern Lights also known as Aurora Borealis in the northern hemisphere and Aurora Australis in the southern hemisphere. The bright dancing lights of the aurora are collisions between electrically charged particles from the sun that enter the earth's atmosphere. Auroral displays appear in many colors although pale green and pink are the most common. Shades of red, yellow, green, blue, and violet have been reported. The lights appear in many forms from patches or scattered clouds of light to streamers, arcs, rippling curtains or shooting rays that light up the sky with an eerie but beautiful glow.
Variations in color are due to the type of gas particles that are colliding. The most common auroral color, a pale yellowish-green, is produced by oxygen molecules located about 60 miles above the earth. Rare all-red auroras are produced by high-altitude oxygen at heights of up to 200 miles. Nitrogen produces blue or purplish-red aurora.
A - Taken at Mt. Aurora Lodge (Skiland) at Fairbanks, Alaska March 14, 2015 at 11:16 PM
B - Taken at Chena Hot Springs, Alaska March 18, 2015 at 12:37 AM
C - Taken at Chena Hot Springs, Alaska March 17, 2015 at 12:41 AM
D - Cabins at Chena Hot Springs, Alaska March 17, 2015 at 1:30 AM
E - Taken at Chena Hot Springs, Alaska March 17, 2015 at 1:31 AM 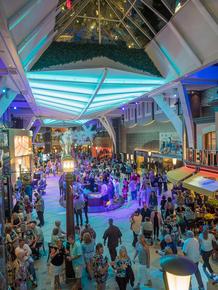 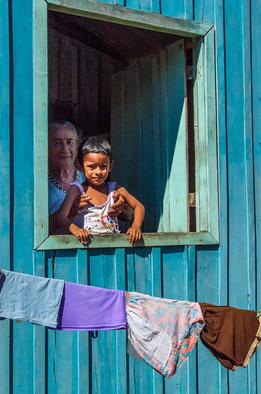 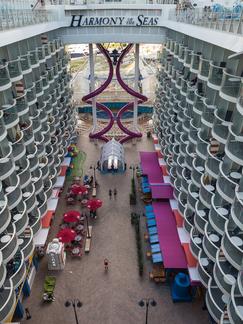 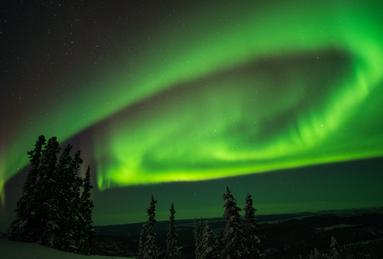 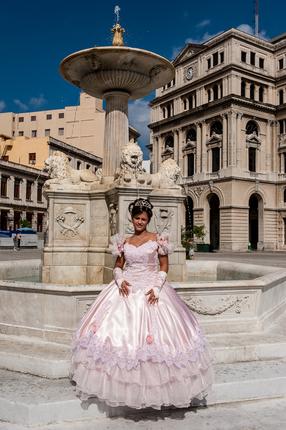 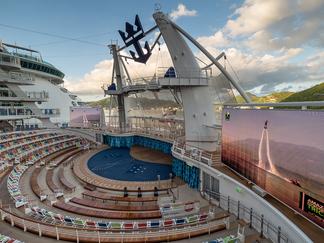 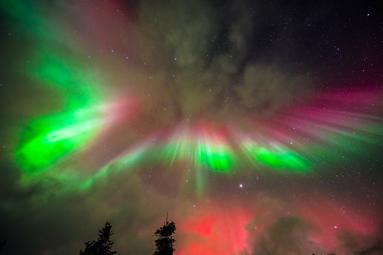 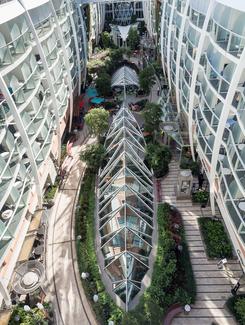 In May of 2004, Fran and Ron Chilcot of Laguna Beach, CA had organized a 16 day riverboat trip in the Amazon region of Brazil. They had one space so I joined them for a very interesting journey. Ron had chartered the *Victoria Amazonica* captained and owned by Moacir Fortes. Moacir was born and raised in the Amazon region and became an expertise in things pertaining to the fauna, flora, and history of the region. We began our trip in the town of Manaus, Brazil situated on the Rio Negro River. Manaus is only about 11 miles above what is known as the "Meeting of the Waters". This is where the lower Amazon River begins. On one side come the very dark water of the Rio Negro and the other side which joins it is known as the Rio Solimes <https://en.wikipedia.org/wiki/Rio_Solim%C3%=
B5es> or Upper Amazon, a very light sandy colored river. We began our trip on the dark water of the Rio Negro following it north and west exploring its many river branches and eventually reaching the borders of Ecuador and Venezuela.
Our trip ended with a few days on the light colored Rio Solimes <https://en.wikipedia.org/wiki/Rio_Solim%C3%B5es> River.
An interesting fact is that the dark water of the Rio Negro and its tributaries does not allow mosquitoes to breed. Its pH ranging of 2.4 - 4.9 prevents *mosquito* larvae from developing.  That was certainly not the case on the Rio Solimes
<https://en.wikipedia.org/wiki/Rio_Solim%C3%B5es> where we found mosquitoes in swarms.
I have chosen two very contrasting images from this trip. The first is palm fronds, a mirror reflection in Lake Jarada Igarap on the Cachoeiras River.  The water was very still early in the morning. This picture is somewhat unusual because it is difficult to distinguish which is real and which part is the reflection. They sort of blend in together and render an oval image.
The second picture was taken in Novo Airo, a small town on the Rio Negro River. Novo Airo began as a Jesuit settlement at the mouth of the Jau River <https://en.wikipedia.org/wiki/Ja%C3%BA_River_(Amazonas)> in 1668 and was named Santo Elias de Jau. The settlement inhabited by Indians grew into a village and later a small town. It prospered during the rubber boom from 1890 to 1920. In 1938 the name was changed to its present name. Unlike some villages and towns in the Amazon region, Novo Airo can be reached by a road from Manaus as well as by river.
I was walking around the town with my camera when I saw a small boy peep out of an open window in a house. No doubt he was wondering who this strange looking man was outside his house. I am guessing that it was his grandmother who came to his rescue and held him up so he could see better. I captured the decisive moment because the two of them never looked at me
at the same time again. Some things that I like about the picture are the simple shutter without glass in the window. If you look closely you can see the dirty worn area on the bottom of the window framing. No doubt there have been a lot of small hands on that window over the years. The laundry drying on the line adds a nice addition of color to the wooden house. 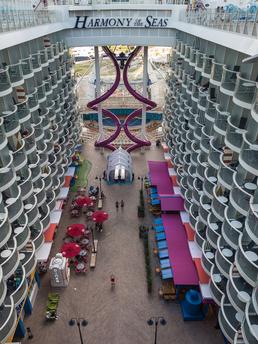 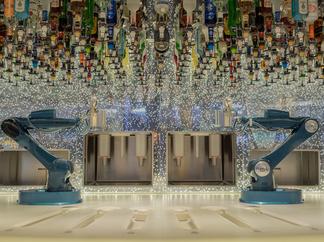 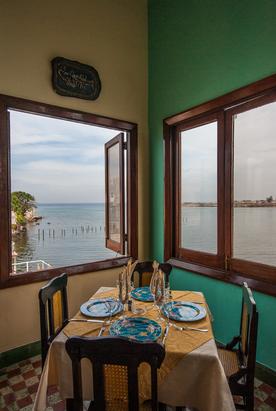 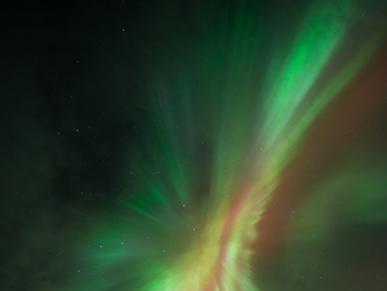 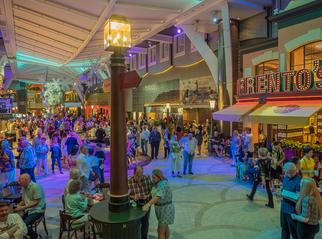 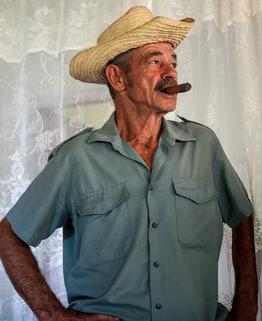 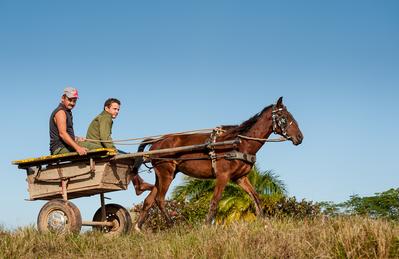 Before it was legal for US citizens to visit Cuba except on humanitarian missions, Margaret and I booked a two week tour to Cuba with Eldertreks, a Canadian company. US dollars were not widely accepted in Cuba so we took Euros left over from travels to Europe. First, we flew to Cancun, Mexico and spent the night. The next day we went to the Cancun airport and paid
$10 for a Cuban visa. After landing in Havana, passport control stamped our visa and we were on our way. The stamped visa would be our legal exit paper for our flight back to Mexico. Before leaving Havana airport, Euros were exchanged for Cuban pesos. We found the Cuban people to be very friendly towards us. Be warned though, if you do not like black beans and rice, do not go to Cuba.
A - Quinceanera at Plaza de San Francisco in Havana, Cuba. Many cultures have coming of age ceremonies, but one of the most extravagant may be the quinceanera in Cuba when a girl reaches the age of 15. Though slightly different throughout Latin America, the Cuban quinceanera tradition includes six costume changes, a massive party and a ride through the streets of Havana, waving to admiring fans. Parents start saving for quinceanera when a girl is born; some consider the quinceanera more important than a marriage ceremony.
B - Don Alfredo is standing in his house in the Viales Valley of Cuba. Don Alfredo is a tobacco farmer on his family's farm. The government takes all but a small percentage of the tobacco after it is cured. The farmer is paid a fixed rate and can consume or sell the small amount of tobacco he is allowed to keep. Don Alfredo rolls his own cigars and sells the few that he does not smoke.
C - Horse drawn cart travelling along the side of a 4-lane highway in central Cuba.  The background was very cluttered so I kneeled down on the ground and waited until the horse and cart were on a small rise to put blue sky in the background.
D - This is the Plaza Mayor in Trinidad, Cuba. The view is from the balcony of Casa Ortiz. Trinidad is my favorite city in Cuba. It has many buildings from the colonial times and a very pleasant central square. You will see local people walking in the plaza as well as riders on horses in the streets.
E - La Terraza de Cojmar restaurant in Cojmar, Cuba which is on the coast about 22 miles from Havana. Hemingway lived near the fishing village of Cojmar where he frequented La Terraza and always sat at the same table looking out towards Cojmar Bay. It became known as Hemingway's table. The restaurant is even mentioned in "The Old Man and the Sea". 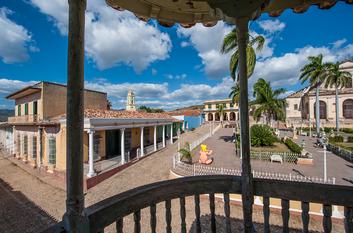 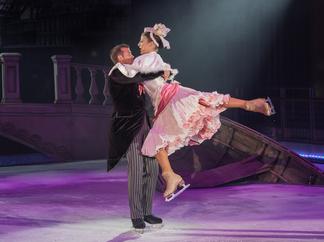