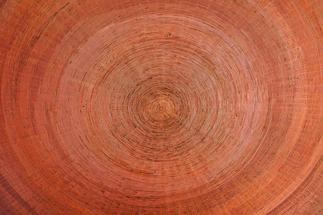 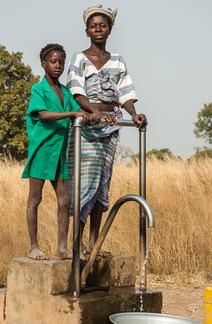 Hope this goes out. I am on the Viking Rolf on the Seine River in France and the internet service is very slow.
This week we visit the high arctic mosses and rocky shores of Champ Island. Champ Island is an icy landmass in Russia's Franz Josef Land archipelago. I visited Champ Island while on an expedition to the North Pole.
What intrigued me about this place was the mysterious stone balls scattered around the island. These strange spherical rocks ranged in size of a baseball to 10-12 feet in diameter.
This is a very remote corner of the world and seldom visited by humans. There have been similar discoveries in other parts of the world where people have claimed the stones to be the work of ancient aliens, dinosaur eggs or other out-of-place artifacts. A geologist on our expedition said that the stones were most likely a product of concretion, a process by which the precipitation of minerals cement between the particles of sedimentary rock or soil to form a hard mass that after being tossed in the sea for millions of years forms the intriguing stone spheres.
Whatever caused their formation certainly challenges the imagination and does not make them any less impressive to behold. 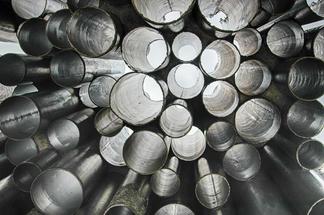 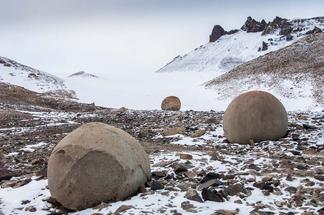 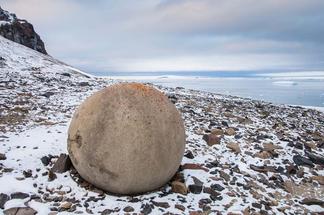 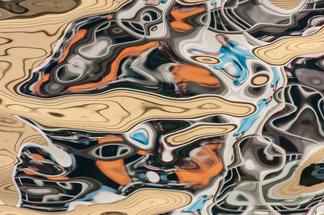 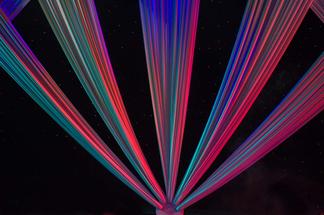 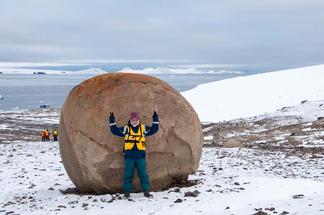 I shared at least two of this week's pictures with a small group of people in the spring of 2015, but have not used any of these in my "Picture of the Week" series.
So this week we travel to Anchorage, Alaska. I joined a small group of photographers put together by Joseph Van Os Photo Safaris. When I checked into my hotel a sign near the airport read -18 degrees Fahrenheit. I thought to myself, "Wow that is COLD". As it turned out -18 was the highest temperature I would see until the day I flew home. The low for the week was -38 degrees Fahrenheit.
I had come to photograph three main things: dog sled races, ice carvings, and the Northern Lights or Aroura Borealis. We were fortunate with the Northern Lights because we saw displays each night. I got excited when I saw the lights the first night but was told by a local that it was only about a 3 or 4 on a scale of 10. We spent a few nights in Anchorage, venturing out to different locations each night. Then we drove about 60 miles or so north to Chena Hot Springs Resort. This is where the Aroura Borealis were best.
Should any of you serious photographers have a chance to photograph the Northern Lights, here is what worked for me. With the camera on a steady tripod I set the focus to "manual" and pointed the camera towards stars in the sky. Looking at Live View the focus was adjusted so a star was sharp. This setting was never changed for the night. For me an ISO of 1600 was about right. I wanted my exposure time to be 10 seconds or less. If the exposure time is increased to 15 seconds or longer I would have more noise and the stars would begin to leave streaks in the sky. To get the proper composition I would take a shot by pointing the camera in the direction of the lights. Make an exposure and look on the LCD screen at my exposure. I would then reset the camera direction by guessing and make another exposure. Within 3-4 shots I could arrive at what I wanted. I tried using a cable release but it froze and became useless, so resorted to the camera timer set to 2 seconds.
A.      Cabins taken March 17, 2015 at 1:30 AM
B.      Sky taken March 17, 2015 at 1:31 AM
C.      Ice museum taken March 18, 2015 at 12:18 AM
D.      Sky taken March 17, 2015 at 12:41 AM 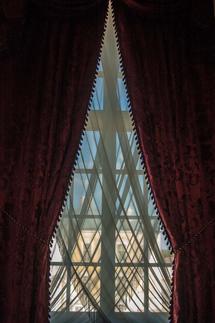 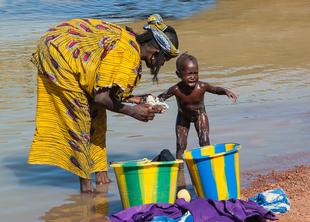 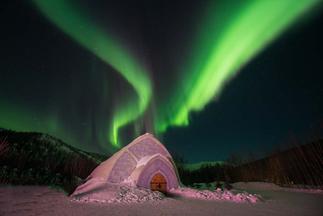 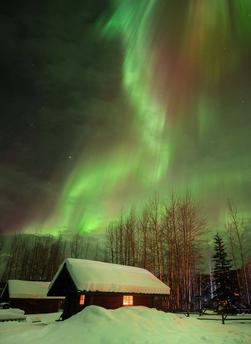 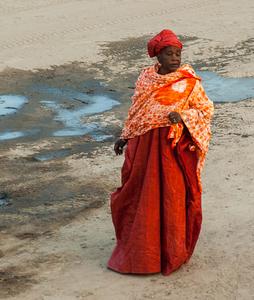 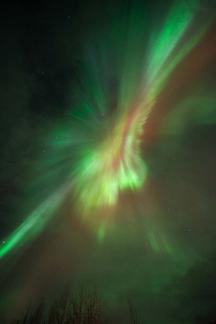 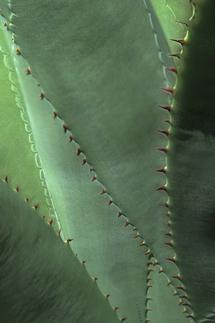 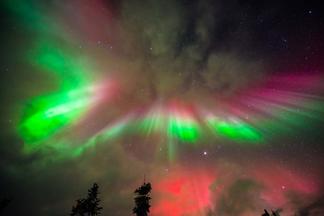 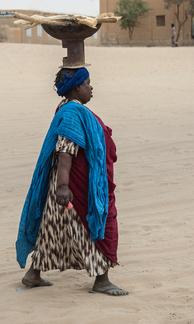 A.      This woman was walking in the early morning in Timbuktu, Mali. There had been a rare shower during the night and water was still in the dirt street. I was eating breakfast on the upstairs outside open patio of my hotel when she walked by on the dirt street below. She had a very regal look about her.
B.      Here is a woman walking with her stove on her head. In the stove is her fire wood. She is also in Timbuktu in the middle of the day. Sand is everywhere in Timbuktu. I do not remember any paved streets.
C.      We were at the Bani River ferry crossing near the town of Djenne, Mali. The term ferry was not at all what I think of when a ferry is mentioned. While there was such a boat large enough to transport trucks and cars, most of the traffic was transported in small boats rowed across the river. Motorbikes and goods were all loaded in small rowboats. There was a lot of activity at this place. People were washing clothes and as you see here, a mother was bathing her child in the river. The little boy was not at all happy about the process. People were selling everything from food to clothing. "Shade tree" mechanics were working under small trees on vehicles needing repairs. There were many forms of transportation such as horses, donkeys, motor bikes, bicycles, trucks, and cars.
D.     It was mid-morning in Natitingou, Benin and this woman was walking down the main street with goods on her head. She was probably taking her merchandise to the local market to sell. We were travelling in an old Mercedes car with the windows rolled down because the A/C was not working. I had been photographing out the open window as we drove very slowly through town. I took this picture and was immediately stopped by a policeman. He thought I had taken his picture. Taking pictures of police and military is prohibited in Benin. I assured him that I had not taken his picture but he did not believe me and was threatening to take us to the police station. Since I was using digital capture I showed him the LCD screen on the back of my camera what I had recently taken. When his picture did not appear, he seemed satisfied and waved us on.
E.      A woman is paddling a boat on Lake Nokoue near the stilt village of Ganvie, Benin. I like how her large hat shaded her baby who is sound asleep on her back as she paddles.
F.       A woman and a young girl are drawing water from a comm unity well at Tioyo Village in Burkino Faso. They work a pump with their feet.   Let me share a story told to me by a local man. This was the only working well in the village. A few years back a volunteer group from the USA came and wanted to install four new wells in the village, all free of charge. All the people really needed was one or two more foot pump type water wells like the one in this picture. The charity group insisted on installing modern equipment for the best efficiency. The wells were dug, motors were nstalled, electric pumps were put in place and the water poured forth. Now five or six years later the new wells are silent. First, there was a problem obtaining sufficient fuel to run the pumps. Then the belts began to break and replacement belts were not easily available. A rubber gasket broke and so it went until none of the wells were working. Meanwhile the old foot pump well was put back in service. This charity group had the best of intentions but failed to consider local conditions and maintenance. 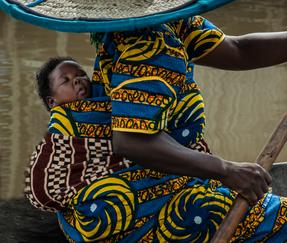 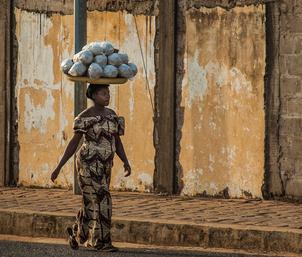 This group of images could be considered abstracts. I have always liked to capture abstract pictures, but rarely show them to anyone. There is a reason for not sharing abstracts and that is because most people do not care for them because they are not recognizable. Therefore, I have attached seven completely different examples with the idea that perhaps there is maybe one out of seven you might like. Only two of the pictures will be recognizable as what they are, and that is the last two.
A.      Let's begin with a water cascade in a hotel in Oranjestad, Aruba. Shades of blue against the dark water give the viewer a glimpse of serenity.
B.      You are looking at the curtains in the showroom of the Costa Mediterranea cruise ship. I like the array of color reaching skyward, almost like a light show.
C.      I am standing in the center of the Temppeliaukio Church in Helsinki, Finland. This is a Lutheran church made of rock with a wooden ceiling. By looking straight up, the wooden ceiling looks like any number of things except what it really is.
D.     This is the Sibelius Monument dedicated to the Finnish composer Jean Sibelius in Helsinki, Finland. Sibelius was a composer who composed Finlandia, a national song of Finland. There is a church song, "Be Still My Soul" which has been put to the same music as Finlandia. I have placed my camera under the monument looking up towards the sky.
E.      These are water patterns along the harbor of Halifax, Nova Scotia. Water is the dark area while the colors are created by reflections from boats and buildings along the waterfront.
F.       Many of you will recognize this as being an agave plant. I have selected just a slice of the plant and eliminated everything in the background.
G.     You are looking out a window in the Rundale Palace in the country of Latvia. The drapes inside are slightly recognizable as we view the palace exterior across a courtyard. What catches the eye is the shape and angles of the window curtains. 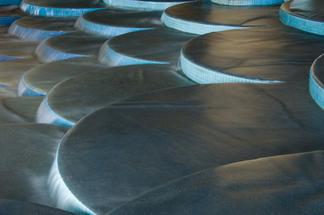 Back To Top
View on Mobile