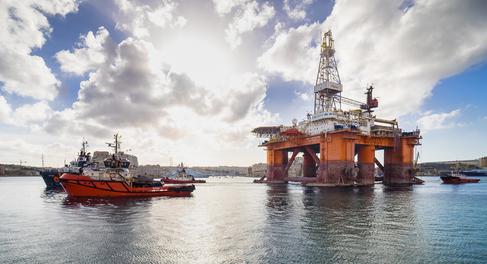 This week’s picture is selected not for its quality or artistic value. It is selected for being an unusual subject rarely seen. I have observed off-shore gas/oil drilling platforms in various seas and oceans around the world, but this is the first time I have seen one being moved and the first time I have seen one up close. I was in Valleta, Malta on my way to catch a ferry to a nearby island. I had a photo guide for the day and was busy taking pictures along the harbor when Dragana Rankovic, my guide, called me to come see what was happening. There were seven tugboats pulling the GSF Celtic Sea drilling platform out of harbor towards the sea. This platform was huge and a sight to see.
This was the GSF Celtic Sea deepwater semi-submersible drilling platform. It was built in Brownsville, Texas and was put in service in 1997. It is 240 feet long and 240 feet wide with a height of 118 feet. The draft is 68 feet when in operation and 28 feet when in transit like you see in this picture. It can handle a 140 person crew and can drill to a depth of 25,000 feet. The in transit speed can be up to 5.75 MPH. Should you be interested in additional information you can go to the following web site: 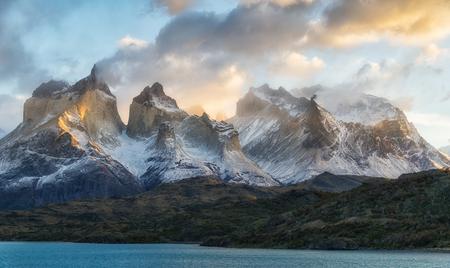 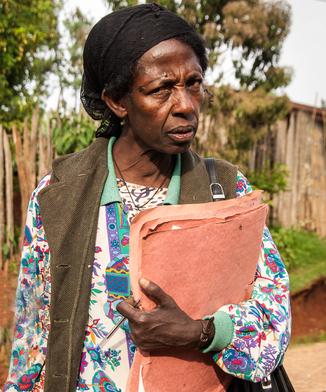 Patagonia encompasses the southern section of the Andes Mountains as well as deserts, steppes, and grasslands. It extends to the Pacific Ocean to the west and the Atlantic Ocean to the east.
The Paine Massif of the Paine mountain range is in the Chilean portion of Patagonia and it is there we find the Torres del Paine which is the distinctive granite peaks of the mountain range. The peaks rise up to about 8200 ft. above sea level.  Surrounding the mountain range are scenic valleys, rivers, lakes, and glaciers.  I was there during their fall (April 2011), and I must say that it was the windiest place on earth that I have ever been other than Antarctica.
Our group of about ten photographers had four full nights at the Pehoe Lodge (pronounced pay-way). This lodge is located on a 12 acre island in Lake Pehoe, so from our lodge we had a wonderful view of the Paine mountain range.
My goal was to get a good picture with morning light on the peaks of the Torres del Paine. Each morning I would spring out of bed, grab my camera and tripod and hurry out to a chosen spot along the lake. Each morning I would come back to breakfast without getting my shot due to clouds blocking the sun or clouds surrounding the tops of the mountains. Each day we ventured to other places in Patagonia and had great success. It wasn’t until the fifth and final morning and we were packing up to leave that the clouds parted and the tops of the peaks showed their splendor.  Finally, I was able to capture the illusive peaks I had been seeking.
Bonus:I am including a picture of an Andean condor (Vultur gryphus) flying in Patagonia. It is rare to see this bird flying below eye level since they typically sore high in the sky. We were on a high road overlooking a valley. These birds had been sitting on rocks and when they flew from their perches they would sail down towards the valley below. It is also rare to get this close and see several dozen at one time. The condor is a very large bird with a wingspan of about 10 feet. It is a very revered bird and a national symbol of Argentina, Bolivia, Chile, Columbia, Ecuador, and Peru. Notice that the condor soars with its wings held horizontally and its primary feather bent upwards at the tips, not flat like our vultures. The condor nest on inaccessible rock ledges high in the mountains and are one of the world’s longest-living birds, with a life span of over 70 years. 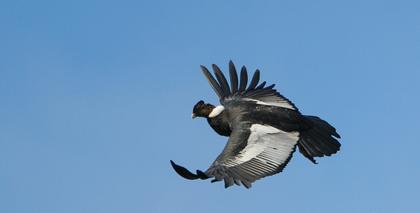 After a week or so visiting the northern regions of Ethiopia our travel group had traveled south and had spent the past ten days visiting tribes of the very remote Omo Valley in southern Ethiopia. We had been traveling in a region with no roads, only animal trails and dirt tracks. We traveled in 4X4 vehicles. Our nights were spent in tents. Showers were few and far between. This was the end of the first of a two day trip back to Addis Ababa, the capital of Ethiopia. It was late afternoon and we had arrived at what seemed to be luxury digs, the Aregash Lodge nestled between coffee fields and lush vegetation on the outskirts of Yirgalem Town, which is about 200 miles south of Addis Ababa. Most of the group could not wait to take a hot shower and lie down on a real bed for a bit of rest before supper.
That is everybody but me. My routine as long as there is still light when we reach a destination, is to grab my camera and go see what I can find. It was only about a mile up a dirt road (see attached picture) to the small town of Yirgalem, so off I went. It was market day for the Sidama people so things were alive and interesting. There were people, houses, and domestic animals to catch my eye. In the process I had attracted several young boys who wanted to be in all of my pictures. As soon as I started to focus on a subject they would rush over to get in front. It was not long before I would try and “out fox” them by pretending to photograph in one direction only to turn quickly and refocus in another direction. I soon tired of this routine and tried to run the boys off. Help arrived in the form of a woman with an air of authority. She scolded the boys and gave them a very stern look. The woman was a primary school teacher who knew a few words of English. The boys knew she was all business and left me alone from that point on. I thanked the woman and took a few pictures of her before I resumed my ramble.
The pictures that I took of this teacher were all okay but the real picture was one I am attaching and she did not know that I took it. When she was scolding the boys I fired off a few frames from my hip without bringing the camera to my eye. This is a technique that I use often to grab shots of people without them knowing it. I point, auto focus, and click. Sure I mess up from time to time but do get more keepers than I miss. Look at the expression on the woman’s face and her eyes.  This natural candid expression of “I mean business” was missing when she posed. 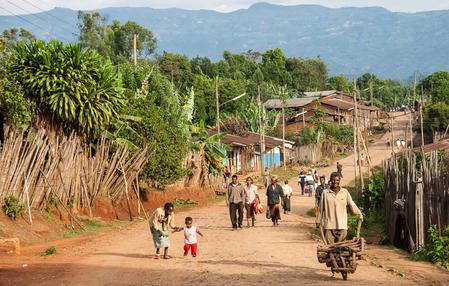 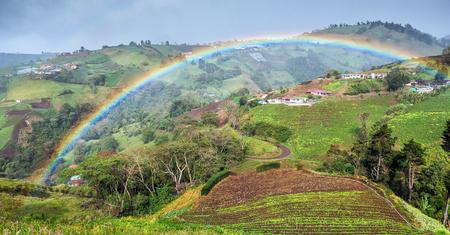 The definition of a rainbow is “an arch of colors formed in the sky in certain circumstances, caused by the refraction and dispersion of the sun's light by rain or other water droplets in the atmosphere”.
We have all witnessed rainbows from time to time and I have also photographed many rainbows over the years. What makes this one special for me is the fact that I am looking down on it from a high point on a road and that there is something of interest under the rainbow. Typically, most rainbows that I have seen are high in the sky. While the rainbows themselves are still beautiful there is little else for the eye to see.
When I look at this image my eye goes first to the rainbow and from there I take a quick glance around the scene. Then I notice what appears to be a corn field in the foreground that falls away downhill to settle on new crops planted on a mound or small hill. The freshly tilled soil makes the new crops really stand out. Beyond that small mound of freshly planted crops I notice a road curving through the trees with houses below it and more houses above it. All of this fits neatly under the rainbow. The sky is a pleasant blue-grey with a hint of a reflection of the rainbow in the sky itself. So unlike most rainbow compositions, there is much to look at in this image.
The rainbow was in Costa Rica along the road from Grecia to Fortuna. The trip was composed of eight photographers, arranged and led by Darcy Pino (www.darcysphotography.com). Darcy lives in Georgia but grew up in Costa Rica and does a wonderful job of arranging and leading her photo trips. John Mariana, who also lives in Georiga, (www.marianaphotography.com) was a co-leader.