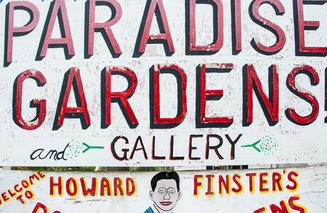 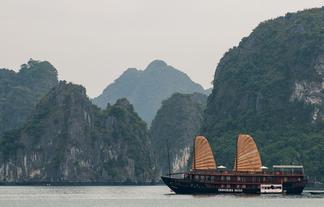 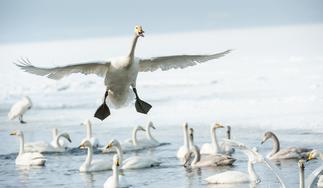 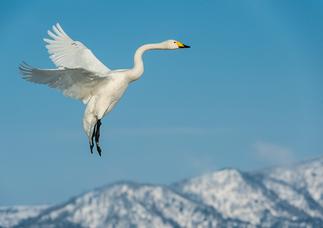 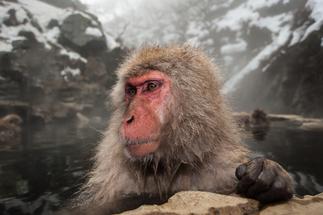 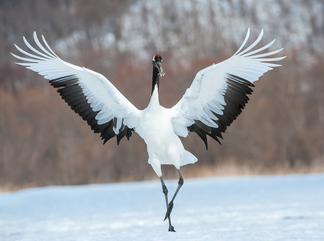 Of the countries that I have visited, perhaps India is my favorite place to photograph. A photographer is never bored in India. Photo possibilities are everywhere.  This is a small slice of life along the western coast of southern India.
A.      Gate of India constructed in 1924 in Bombay India (now Mumbai). The arch monument was erected to commemorate the visit of King George V and Queen Mary of England in 1911.
B.      Chinese fishing nets in Cochin, India. These fishing nets are fixed land installations and the formal name is shore operated lift nets. They are operated by a team of up to six fishermen. As well as India they can be found throughout coastal southern China and Indochina.
C.      Goats resting on a sidewalk in front of the closed doors of a business in Cochin, India.
D.     Jain Temple, Tribhuvana tilaka Chudamani Basadi or 1000 Pillars Temple in Moodabidri, India. This is the largest and finest of its kind in coastal Karnataka. It was originally built in 1430 and is considered the most ornate of the Jain temples in this region. It gets the name Thousand Pillared Temple because of its large number and variety of pillars.
E.      Fishing boats in the port of Mamagoa, India. This is Goa's main port and was colonized by the Portuguese in the sixteenth century. 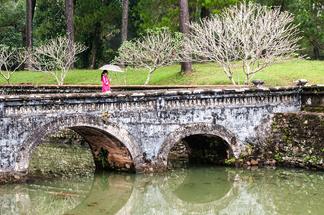 Japan in The Winter

People might wonder why go to Japan in February. Many typically think of Japan as a wonderful destination in the spring when the cherry trees are in full blossom or maybe in the fall when Japanese maple trees display brilliant fall colors. Our trip in 2010 was called Japan’s Winter Wildlife, organized by Joseph Van Os Photo Safaris and led by John Shaw.
It did not disappoint. I experienced a very different part of Japan as our small group traveled about Japan’s untamed upcountry side. We ate like the Japanese and slept on a futon (traditional Japanese style bedding) all very different from back home. Familiar western-style accommodations can be found in Tokyo and other large Japanese cities, but not in the wilds of the “Japanese Alps”. For this week I am featuring a few birds and animals. The landscape and scenic images will be saved for another week.
A.   White-tailed Sea Eagle flying at the Akan Crane Center in Hokkaido, Japan.
B.   Steller’s Sea Eagles sitting on pack ice in Rausu on the Shiretoko Peninsula in Japan.
C.   Whooper Swan starting to land on Kussharo Lake in the Akan National Park, eastern Hokkaidō, Japan.
D.   Whooper Swan has his feet out for a landing onKussharo Lake in the Akan National Park, eastern Hokkaidō, Japan. In the lower right hand corner you can see                    another swan that has just touched down on the water.

E.   Mallard duck landing on the snow at Kusssharo Lake
F.   The Red-crowned crane (also called the Japanese or Manchurian crane) is sacred and seen as a symbol of fidelity, good luck, love and long life in the Orient. It is also          the second rarest crane species in the word. This bird is doing a dance at the Akan Crane center at Hokkaido, Japan.
G.  Japanese Macaques at Jigokudani Yaen-Koen Monkey Park. This is the only place in the world where monkeys bathe in hot springs. They are referred to as snow            monkeys  and descend from the steep cliffs and forest to sit in the warm water during the winter months. This is a large male
H.  Two juvenile Japanese Macaques cuddling on rocks at the edge of the hot spring 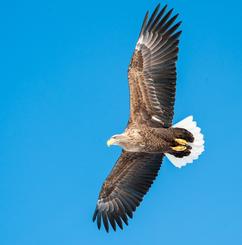 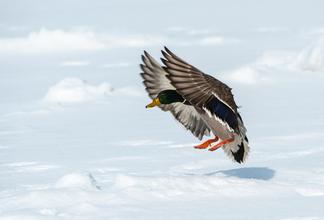 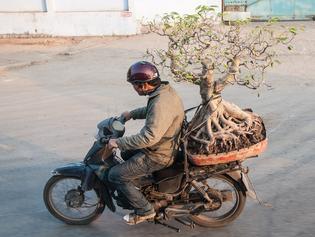 Howard Finster, 1915-2001 lived only about 120 miles north of where I live in Sharpsburg, GA, yet I had never heard of him until after his death. Finster was a Baptist minister in Summerville, Georgia who filled his home and the surrounding four acres of land with folk art by his own design.
Let me say before we go any farther that I am not usually a fan of folk art. I find it a bit crude and messy for my taste. It also seems to me that folk artists are not appreciated so much while they are living as they are after their death. While visiting Finster=E2=80=99s home, his church, and his garden I had more of a feeling of being in an unusual junk yard arranged in somewhat of an arty fashion.
Howard Finster called his home and surrounding land "Paradise Garden". In 1976 he said that he had a vision from God to preach through his art and is said to have created 46,000 works of art on his property. He said that he was on a crusade to save the world before it was too late. How I do not know unless it was to recycle trash and junk into pieces of art. Early in his life, other than preaching, he worked in mills, worked as a carpenter, and repaired lawn mowers and bicycles.
Paradise Garden is open Thursday - Sunday 11 AM - 5 PM.
A.      Sign.
B.      Inside of a hall.
C.      Outside wall of his home.
D.     Art on the trunk of a Cadillac.
E.      Outside wall of a building.
F.      Folk Art Chapel entrance door.
G.      World's Folk Art Church. 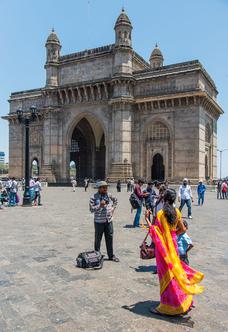 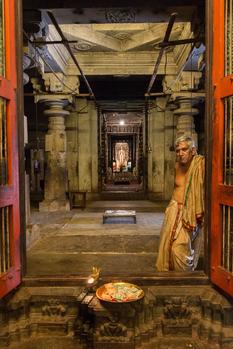 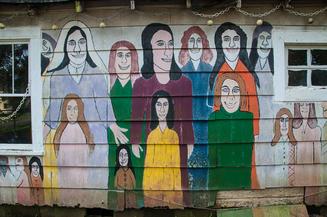 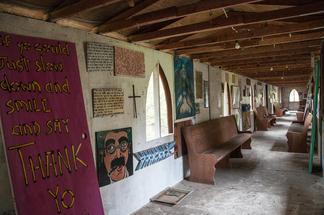 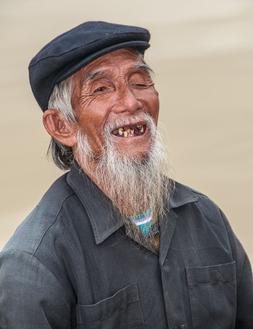 This week we will visit Vietnam. My wife Margaret, daughter Kathi, and I visited Vietnam in November 2009. We roamed the back streets of villages, visited the historic sights, and saw many of the Vietnam War sites. I found the country very photogenic and the people warm and welcoming. Attached are six pictures depicting slices of life in Vietnam.
A.    You are looking at a Junk boat in Halong Bay. Halong Bay is known for its emerald waters and thousands of towering limestone islands that are
covered by rain forests. Unfortunately it was cloudy with a few showers the day we were there.
B.      This is a 104 year old woman sitting in the door of a houseboat in Halong Bay
C.      I had photographed the bridge at Khai Dinh monument of the Nguyen dynasty and liked the trees and reflections in the water. Still something
was missing until I saw the woman with an umbrella starting across the bridge. Even the color of her clothes was perfect.
D.     These bright colors are of incense sticks displayed for sale in a market.
E.      It is rare that I take a picture from a moving vehicle. However, this was a sight that I could not resist. Our bus had a window that could
be opened, we were not going fast and the motorcycle was slowly passing us on the right. The tree in a basket on the back of a motorcycle with dirt
around the roots was a sight that I had never seen before.
F.       This man had a small paddle boat to transport people across the Thu Bon River at Hoi An. I waved at him and he smiled showing his few
remaining teeth. 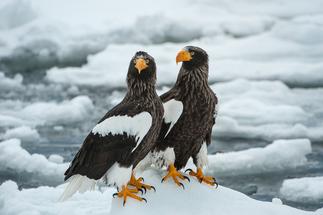 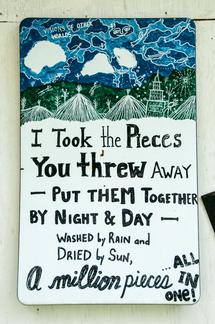 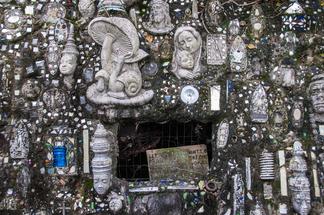 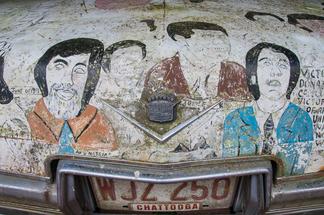 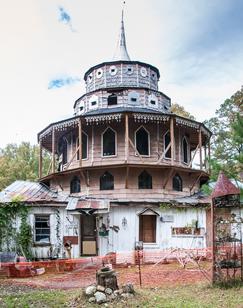 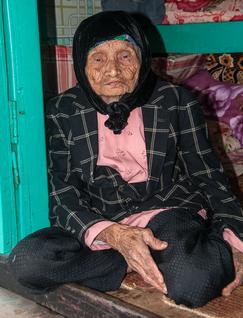 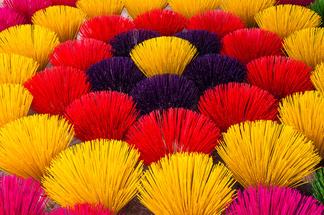 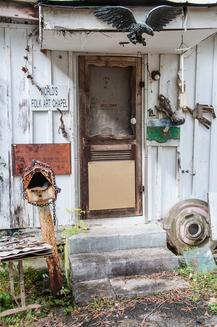 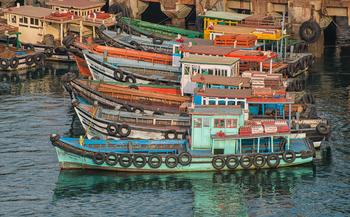 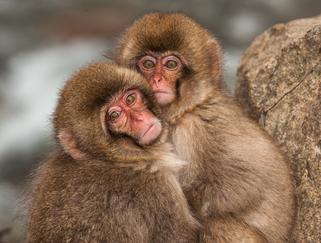 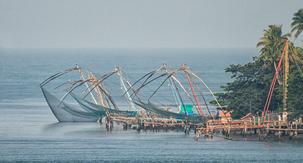 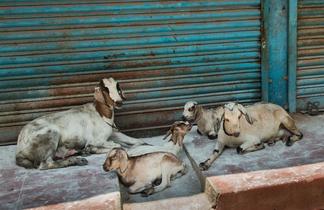