It’s been nearly a month since Hurricane Harvey hit the Texas coast line, however many Texans are still working to help in the relief effort.

The Mineola Railers Square Dancers have already collected nearly $700 in contributions last week at their benefit dance for the Hurricane Harvey relief effort on Sept. 18.

With these contributions, caller Tim Tyl is donating his caller’s fee and the Mineola Railers are donating the door fees which ended up being a $853 donation to the Texas Baptist Men for Hurricane Harvey relief.

The organization applies 100 percent of the contributions towards helping the people that need help related to the hurricane and according to the club’s officials no administrative costs are taken from the donation.

“(This is) just our small way of saying Square Dancers give back to our communities.  Along with the contributions that other clubs in the East Texas SRDA are making we hope and pray that it will make a difference,” Mineola Railers club member Howard Rowan said.

Square Dance In The News 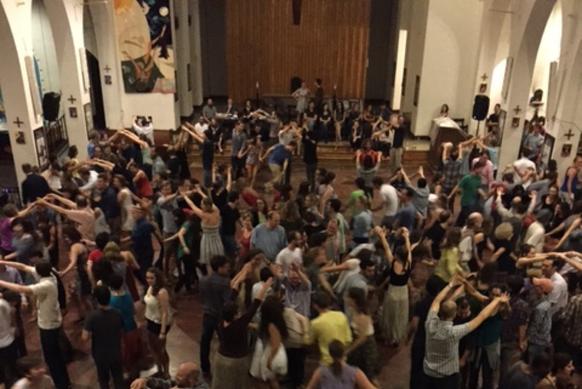 Roughly one Saturday night each month, government lawyers, nonprofit leaders, computer programmers, activists and creative professionals gather by the hundreds in a church in the middle of the nation’s capital and perform dance moves with names such as “duck for the oyster,” “push pa, shove ma” and “chase the rabbit, chase the squirrel.” Then they swing and promenade their partners to live fiddle music and the instructions of a dance caller.

Now put aside your stereotypes: This isn’t some nostalgic re-creation of a rural barn dance, and the dancers aren’t wearing poufy skirts or cowboy hats (not that there’s anything wrong with those things). Many of them have never square danced before or have done so only in elementary school — and probably not because they wanted to.

With all that a big city such as the District has to offer, why do people choose to spend their Saturday nights doing silly things with strangers?

Some friends and I started the D.C. Square Dance Collective in 2011 because, even with the District’s myriad social offerings, we felt something was missing. In a world in which we’re increasingly stuffed into cubicles and communicate with each other via disembodied typed messages, even while supposedly socializing, we more than ever need ways to reach out and actually touch each other. Square dancing provides an excuse to do just that. The physical silliness is liberating, empowering us to express parts of ourselves that stay buttoned up most of the time.

The appeal is far broader than we imagined.

The dance form does admittedly have some unfortunate associations to overcome, and not just because of the Virginia reels that many of us were forced to perform in gym class. Folk dance can seem fusty and arcane, and its supposed purity has led to it being appropriated at times to promote retrograde, nativistic ideologies.

But important new scholarship should put such simplistic and erroneous ideas to rest for good. Dance caller and historian Phil Jamison from Asheville, N.C., argues convincingly in his 2015 book, “Hoedowns, Reels, and Frolics: Roots and Branches of Southern Appalachian Dance,” that American square dance is not a colonial relic from the British Isles, but rather a uniquely American syncretism of European, African and Native American influences. Perhaps most surprising, Jamison found that having a dance caller prompting the steps — a practice that is integral to square dancing and numerous other “traditional” dance forms — was unheard of in Europe and seems to have its roots in the African call-and-response patterns that slaves brought to the New World.

Before calling became routine, you had to go to dance school to learn the dances. Calling made square dancing accessible to everyone, regardless of skill, experience or wealth — in other words, it made it a true folk dance. The District’s dancers, who come from all over the world and from all ages, ethnicities and walks of life, continue to benefit from this democratization today.

Despite such innovations, traditional music and dancing have largely died out in the many rural areas where they once thrived, replaced by more modern musical styles and forms of entertainment. The latest folk revival is happening mostly in cities, and not just here — in recent years, vibrant events have sprung up in Baltimore, New York, Minneapolis, Louisville, Seattle and Oakland, Calif., among other places.

The vast majority of the people who come to these events couldn’t care less if they’re dancing dances with a 500-year history or ones that were created yesterday. I am convinced that they come simply because they believe square dancing is the most fun they can have for their money. Look at the faces of people who have joined hands with seven of their fellow humans, and you will be hard-pressed to find someone who isn’t smiling and laughing. Hundreds of friendships and more than a few romances have had their starts at one of our dances.

I’m not under any illusion that square dancing can solve the world’s problems. But in a society with so many forces attempting to divide us, a dance that literally unites us surely can’t hurt.

The writer is a dance caller and founding member of the D.C. Square Dance Collective.