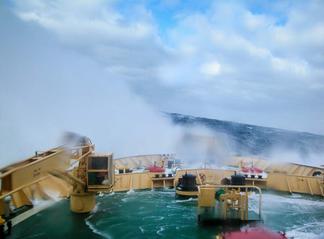 I had driven a couple of hours north of where I live in Georgia to present a program for a photo club in Blue Ridge, GA. It seemed a shame to drive that far and not take any pictures so I booked a hotel room for the night. My plans were to photograph most of the next day in and around Blue Ridge before driving back home. The weather forecast called for fowl weather so I went prepared with rain gear.
I was out at first light and while it was not raining very hard, it was a pesky sprinkle. The good news was that there was almost no wind and the rain subsided before noon. Landscapes and scenes showing the sky were not a likely option on a rainy morning so I began looking for close-up macro subjects. Mid-morning I came upon a number of Euonymus americanus growing
along a stream. This plant is often called a strawberry-bush, hearts-a-bustin', or bursting-heart. It grows native in the eastern United States. Other varieties grow in Asia and Europe. I have several specimens growing in my home garden that were dug up in the wild and transplanted. It seems to do best in shade and when irrigated. The typical height in my garden is about 6-8 feet tall. For most of the year the strawberry-bush is not particularly outstanding. However, in the fall the red berries really make the plant a dominant feature of the landscape and garden.
The specimen that you see here was in a deep shaded area. I found a group of berries that were about ready to drop and had a very clean background. The final image is a composite of seven separate captures with different focus points. Helicon Focus was used to obtain the finished image which has everything sharp from front to back. I particularly liked the rain drops on the berries. 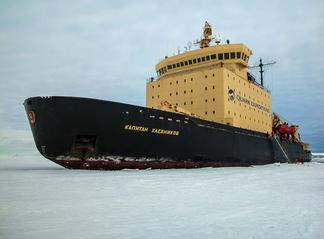 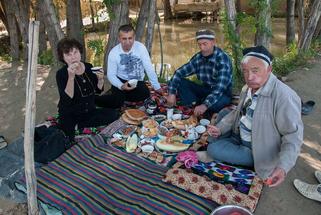 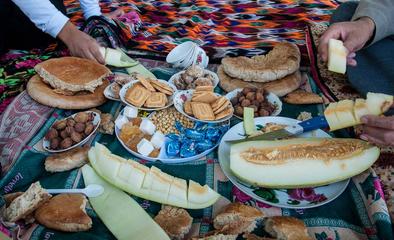 It is often the unexpected that are the most memorable parts of a trip. In September 2010 Margaret and I visited five of the "Stans". This was a very interesting trip to a part of the world that few Americans venture. Sure, it was not always easy such as the border crossing from Uzbekistan to Turkmenistan. And Margret still complains about spending the night in a Yurt in Kirgizstan.
However, our lunch with a farmer in Tajikistan still provides fond memories. Our Uzbek driver could go no farther than the border of Tajikistan. We left the car and walked to the border of Tajikistan where we presented our passports and visas. Once cleared, we were met by a Tajikistan guide, Hamrokul Mirzoev and a car with a driver. Our schedule took us to the ancient ruins of the city of Pendjikent, the "new" city of Pendjikent, markets, school, and the countryside. About mid-day Hamrokul asked if we wanted to see anything special. I told him that it would be nice to visit a farm. He said that he knew a farmer not far from town so he would see if this man was home.
We drove to the house of Jaliloov Razshan, a man about 60 years old. This was a Sunday so several of his daughters and their families were visiting. It was also the middle of the day and food was being prepared in the kitchen. Since it was mid-September, most of the crops had been gathered, so my intentions were to see the barn, farm animals, and fields. The garden still had peppers, tomatoes and some melons on the vine. We toured the farm and returned to the house where the women had been preparing us a small feast and insisted we have something to eat. Outside next to the pond, blankets were laid on the ground and food was spread. We all removed our shoes and sat on the blankets. The bread was delicious and the melon was as good as I have had. Jaliloov could not speak English so Hamrokul was our interpreter.  One could never script this sort of encounter, but I will never forget it. Margaret and I have often thought how we might have handled the situation had Jaliloov and his family come to our house unexpectedly. 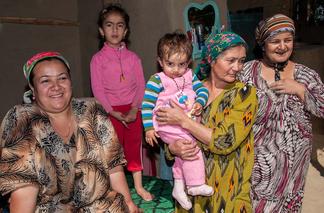 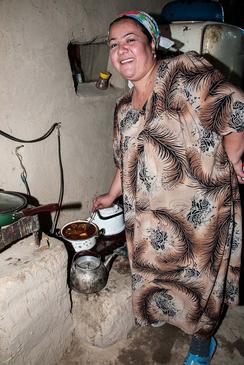 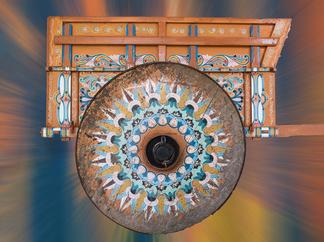 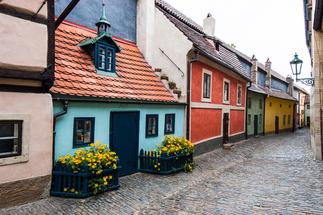 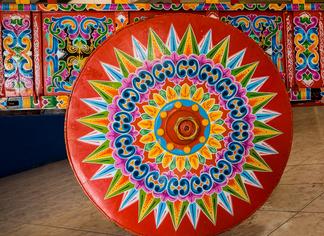 I am attracted to unusual as well as beautiful architecture, so my heart skipped a beat when early one morning I stumbled upon one of the smallest streets in Prague, Czech Republic. The cobblestone street, Zlata  ulicka, when translated to English is Golden Lane and it contains 11 small colorful houses.
It was the end of the 16th century when Emperor Rudolf II was having the northern fortification of the Prague Castle completed that he decided to provide space for his castle marksmen. The lane was constructed with the houses dug into the castle rampart wall. There were 24 marksmen so the houses for them and their families had to be very small. The houses were constructed of stone, mud, and wood. Over the years some of the houses were destroyed and in 1657 there were only 14 houses left. Now there are 11 of the original 24 historic houses remaining.
Whether fact or fiction, it seems that the name, Golden Lane, got its name from alchemists living there in the 1600s who were trying to make a stone
of wisdom which would transform metals into gold. Then in 1831 a Viennese professor of philosophy named Mr. Uhde was doing secret experiments in his house when he caused an explosion. The fire fighters arrived and upon extinguishing the flames found Uhde dead but with a smile on his face and a yellow stone in his hand. The stone was proved to be gold. Where the gold came from is not known, but legend says that the longtime alchemist's quest was finally realized.
I did not go in any of the houses, but today they are part of the Prague Castle complex tour and contain exhibitions about life in the lane over the past 500 years. It is a short but uphill walk from Old Town. Cross the Charles Bridge over the Vltava River and continue up the hill along Nerudova Street towards the castle.

Kapitan Khlebnikov,  pushed up on the  Drygalski Ice Tongue in the Ross Sea, Antarctica 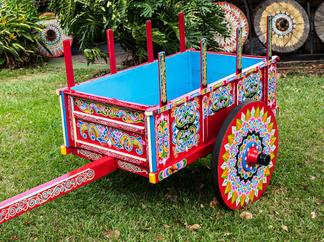 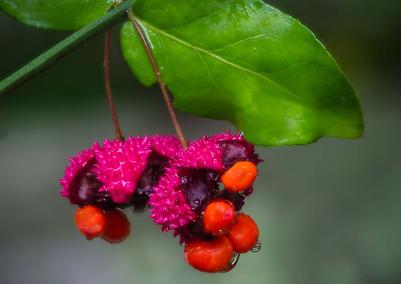 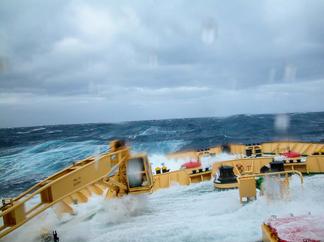 A storm in the Southern Ocean.

January 20, 2002 I joined a month long Quark Expedition trip to the Ross Sea, Antarctica, and the Dry Valleys aboard the *Kapitan Khlebnikov*, a Russian icebreaker built in Finland. We sailed from Lyttelton, New Zealand making stops at Enderby Island (Auckland Islands) and Campbell Island.  We sailed from the sub-Antarctic island of Campbell during the night of January 23rd. and immediately encountered a very large low pressure system. We spent the entire day of January 24 rolling in heavy seas. The ships log showed rolling up to 25 degrees where we had up to 55 foot seas. It was hard to move about the ship. Food could not be prepared or served, so we made do with apples, cookies, smoked salmon, and cheese. Nothing would stay on the tables even though they were covered with wet cloth. The attached pictures were taken that day.
I found a position behind the front window in the lounge. There was a large support pole a few feet behind the window so I got a rope and tied myself to the pole. By doing so I was able to hold the camera with both hands and not be thrown across the lounge during a heavy wave. Little did I know that the storm would not abate during the night. Finally during the day of January 25th as we approached the ice of Antarctica and the winds and seas finally calmed down. During the night winds had reached 71 MPH and the ship rolled to 35 degrees.
To provide some perspective I have attached a picture of the ship. When you are looking out over the bow at the storm, remember it is 37 feet from the bow down to the water level. Therefore any waves reaching the bow were already 37 feet in height.
The ship was not filled to capacity making it possible for me to have a cabin to myself. My cabin had two single beds placed in an L configuration. One bed was along the side bow to stern. The other bed was positioned across the ship, port to starboard. Beds had belts available to keep a person from being tossed out during the night. Due to the heavy rolling I was unable to sleep in either of the beds. Whether the ship was rolling or pitching neither bed would be comfortable. I would either be kept in the bed by the strap or my feet and head would be jammed into the wall as I was pitched to and fro. I would almost be asleep when a sudden hard jerk startled me awake again. It was a long night.  I have spent many days at sea but nothing as severe as this. I did learn one thing: I did not get sea sick, so more than likely I will never be sea sick. 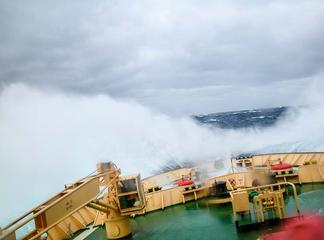 These pictures are dedicated to Darcy Pino, a special friend who was originally from Costa Rica.

The oxcart of Costa Rica had its beginning in 1843 as a means to transport coffee beans in the central valley over the mountains to the port of Puntarenas, a journey of 10-15 days. The first carts were pulled by people and as the carts and loads got larger they were then pulled by oxen. The golden age of the oxcart in Costa Rica was from 1850 to 1933. Painting and decorating the oxcarts began in the early 20th century when each region created its own design for identification purposes. After WWII oxcarts began to be replaced with trains, tractors and trucks.

To see where oxcarts are made, headto the artisan town of Sarchi located on the slopes of Costa Rica=E2=80=99s Central Mountain Range at the eastern edge of the Central Valley, 28 miles from the nation's capital city of San Jose.
Sarchi is famous for it.s colorfully hand painted oxcarts and oxen yokes which are national symbols of Costa Rican folklore and traditions. Today, oxcarts are works of art and still play a principal role in parades and religious celebrations.
Carts were at the cart factory of Joaquin Chaverri Ltd, in Sarchi and in business since 1903
A.      New Cart             B.      Cart from 1958                C.      Old Cart with blurred background 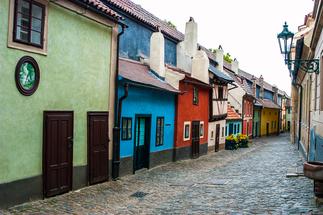 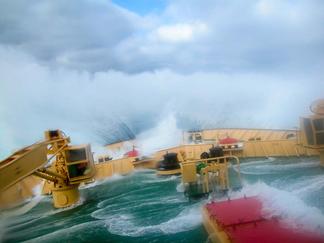