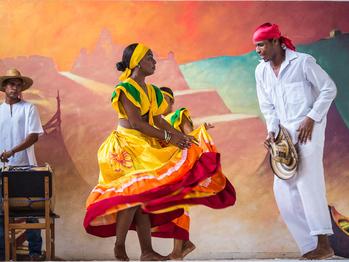 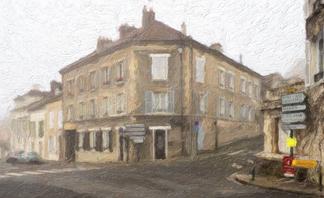 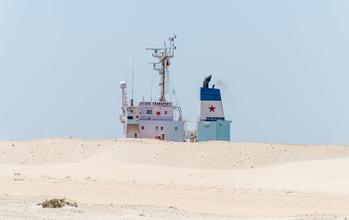 Cumbia is a music style that originated in Colombia's Caribbean coastal region. It is said to have begun as a courtship dance practiced by the African slave population and was later mixed with Indigenous and European influences.
These are folk dancers in Cartagena, Columbia demonstrating this dance style while performing at a restaurant for a large group of tourists. There was a stage at the end of the room and people would hold their cameras in the air above where they were seated to take pictures.  I guess many people do not want to make the effort to get up or do not want to be conspicuous when photographing. I got up from my table and walked down in front of the stage to take my pictures. In order to not block people's views I would kneel down. For the times when I needed to stand I would make it brief. Don't be shy when photographing but do not be obnoxious either. I would guess that the worst offenders are people who are taking video.
A.      The band
B.      Dancer
C.      Dancing couple 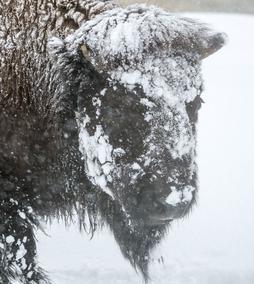 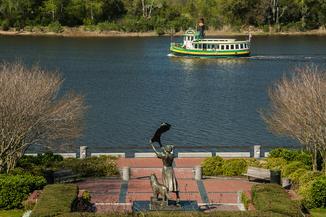 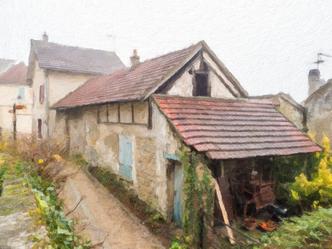 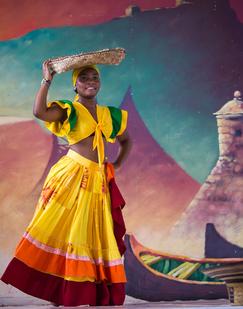 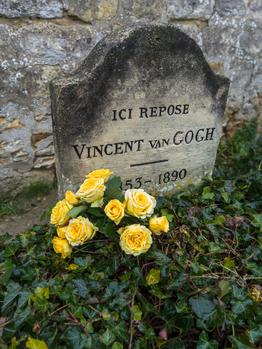 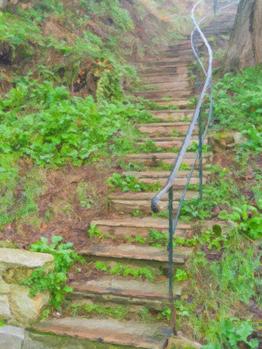 Before Christmas Margaret and I took a cruise on the Seine River aboard the Viking Rolf. From Paris we cruised north to Normandy and back. One of our stops was the small town of Giverny, France where Claude Monet’s home and garden can be visited. We chose this time to go to the nearby hamlet of Auvers-sur-Oise. During the 19th century several painters lived and worked in Auvers-sur-Oise including Paul Cézanne, Charles-François Daubigny, Camille Pissarro, Jean-Baptiste-Camille Corot, Norbert Goeneutte, and Vincent van Gogh. The Dutch painter Vincent van Gogh spent the last three months of his life in this town. We visited the small upstairs room that he rented. The room was empty but even when he lived there the room only contained a bed and a wash basin. There was a small opening in the wall where he stored his clothes and possessions. His painting had to be stored under his bed.
Van Gogh was a troubled soul who lived in poverty and spent most of his time painting. His room and board was paid by his brother, Theo, an art dealer in Paris. In a little over a decade he created about 2,100 works of art including 860 oil paintings, most of the paintings were done in the last two years of his life. About 70 oils were painted during his time in Auvers, Wheatfield with Crows was his last painting and depicted the place of Van Gogh’s suicide. I visited this exact spot. However, since it was winter there was no wheat growing in the field and that particular day it was very foggy, but I did see one crow. On that foggy day I photographed The Church at Auvers and a variety of scenes in the village.
I will share three of the stories that I was told while in Auvers. A local farmer had loaned Van Gogh some money. When Van Gogh could not repay the loan he showed up at the farmer’s house with a wheelbarrow full of paintings. He wanted to give the farmer some of his paintings in payment for the loan, but the farmer did not want any paintings so he told him to forget the loan and keep the money. The farmer later told his wife what had taken place and the wife replied; “why did you not take the wheelbarrow?”
Another story was Van Gogh borrowed a pistol from someone in the village with the excuse that the crows were bothering him and keeping him from sleeping and he was going to shoot the crows. Instead, he went to the wheat field where he had made the painting with the crows and shot himself in the chest. He managed to walk back to his room where he died a couple of days later on July 29, 1890 at the age of 37.
Did you know that he only sold one single painting during his lifetime and that was to a friend who was trying to help him out?
The impressionism art movement is said to have begun in the 1860s in Paris and ended in the 1890’s. The impressionist artists turned away from fine finish and fine details to which most painters had aspired. The aim of the impressionists was to capture the momentary and sensory effect of a scene. They loosened their brushwork and lightened their palettes to include pure intense colors. They avoided the clarity of form that had been the norm. Attached is a selection of my photographs made in Auvers-sur-Oise and then transformed to look like an impressionist painting. I have taken the liberty to vary the degree of impressionism with each rendering depending on the scene. The grave, however, is a normal photograph.
A.Rue Charles de Gaulle
B.Rue Daubigny
C.Wooden gate and steps
D.Houses along Rue Daubigny
E.Steps going up a hill  Notice that my focus is on the 3rd or 4th step and the focus gradually fades away in the distance. Because of the magic of the L16 camera the fading process can be accomplish.
F.Copy of the oil painting of The Church in Auvers
G.My rendering of the above church as it looks today
H.Vincent Van Gogh’s grave in the Auvers cemetery 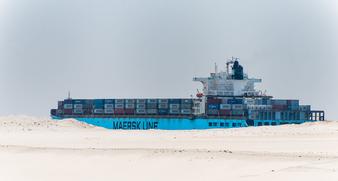 The Suez Canal is an artificial sea-level waterway in Egypt connecting the Mediterranean Sea to the Red Sea through the Isthmus of Suez. It was initially opened in November 1869 after ten years of construction. Ships transit the canal in a convoy of about 25 ships going south (departing from Port Said at 3:30 AM) and 25 ships going north (departing from Suez at 4:00 AM). Through the years ships have become larger and larger. Finally, ships became too large to pass each other in the canal. To manage this problem they used the Great Bitter Lake and the Ballah Bypass as a holding place for ships while the opposite line of ships passed. One convoy would stop in the lakes while the other convoy going in the opposite direction would pass.
In the summer of 2014, only a few months after taking office as President of Egypt, Abdel Fattah el-Sisi ordered the expansion of the Ballah Bypass from 61 meters wide to 312 meters wide for about a 21 mile section of the canal. When the project called the New Suez Canal was completed in 2015, it allowed ships to transit the canal in both directions at the same time.
Unlike the Panama Canal the 102 mile Suez Canal was never a photographer’s delight nor did it keep people out on the decks for the entire ten hours of transit. Now when sailing in the new wide portion it is much like driving a car on a wide interstate highway as opposed to a two-lane country road. Many villages and farms are gone and those that remain are away in the distance. What you see now is sand, sand, and more sand.
The first time that I sailed through the Suez Canal was probably in the early 1990’s. By chance I was out on deck when I saw what looked like a ship sailing in the sand. I later learned that we had passed a convoy waiting in the Ballah Bypass. I have transited the canal several times since then and I always stay on high alert when we are near the Ballah Bypass looking for more ships “sailing in the sand”. The two attached pictures are from a transit April 29, 2013. I have also been through since the widening was completed and there will be no more such pictures of these illusions.
A.    The Maersk Kiel container ship IMO 9153850, part of a southbound convey stopped in the Ballah Bypass 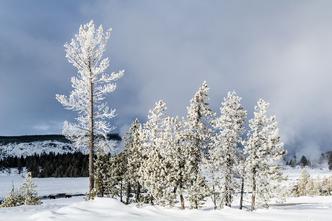 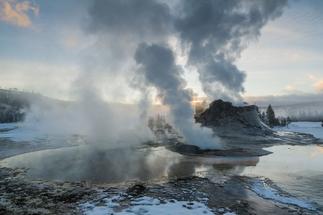 No doubt many of you have visited Yellowstone National Park which is mostly in Wyoming. I would venture to guess that most of those visits were made in the spring, summer, or fall. However, in the middle of the winter the park becomes a special and very different place with only a few of the main roads remaining open. I joined a dozen other photographers on a Joseph van Os Photo Safaris tour that shared two chartered track-converted snow coaches to get us around the frozen snow-covered park. Once we departed West Yellowstone we stayed at both Old Faithful Snow Lodge and Mammoth Hot Springs Hotel. The temperature remained below freezing with the low temperature dipping to about -18 degrees Fahrenheit. During our week in the park we saw very few people other than a few snow mobile tours that came into the park for day trips.
It was a delight to observe the geysers erupting in the freezing temperatures and feel their warmth against the ever present cold wind. Our winter days there were short; animals were easy to spot, walking required extra effort and care, and the lack of visitors created a peaceful feeling seldom experienced during the high tourist season.
A.      American bison at Old Faithful Geyser Basin
B.      Trees with frost and snow in Old Faithful Geyser Basin
C.      Coyote travelling along a snow-covered road in the Lamar Valley
D.     Castle Geyser at Old Faithful Geyser Basin
E.      American Bison in a snow storm at Emerald Geyser, Black Sands Basin 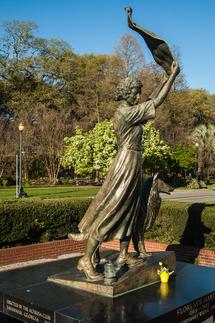 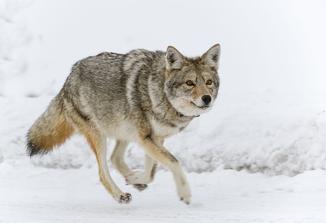 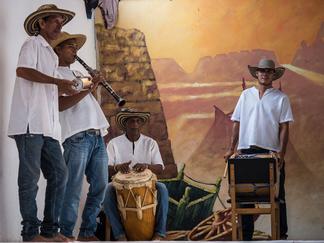 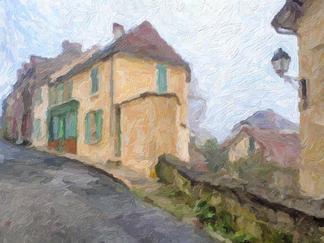 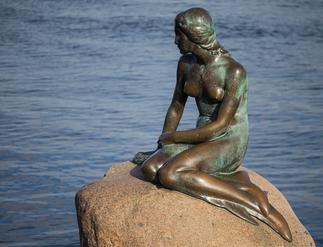 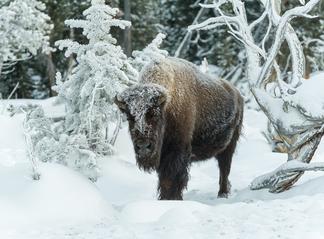 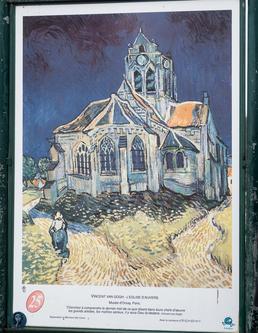 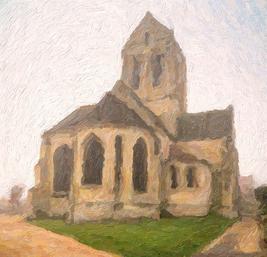 Most people are familiar with the bronze statue of the “Little Mermaid” in Copenhagen, Denmark. This sculpture had its beginning with a fairy tale written by the Danish author Hans Christian Andersen about a young mermaid who is willing to give up her life in the sea and her identity as a mermaid to gain a human soul. The tale was first published in 1837, and August 1913 the sculpture was given as a gift to the city of Copenhagen by the Danish brewer, Carl Jacobsen.Cross the Atlantic Ocean to the east coast of the USA and in Savannah, GA you will find the “Waving Girl”. I doubt that most people are familiar with Savannah’s “Waving Girl”. Her name is Florence Margaret Martus, 1887-1931. She was born to a lighthouse keeper’s family at the Cockspur Island Lighthouse near Savannah, GA. By the time she was 17 both of her parents were dead so she eventually settled at the nearby Elba Island Lighthouse with her brother, George, the lighthouse keeper. Each day she would wave with a handkerchief to ships as they entered Savannah’s port. Sometimes at night she would wave with a lantern. Over time there were many stories as to why she was waving, but when asked, her answer was very simple. She said: “I was young, and it was sort of lonely on the Island for a girl, so I started to wave to the ships which passed. They would return the greeting and sometimes salute”.  Through the years lonely sailors strained their eyes to look for her and over her forty-four years on the Island it is estimated that Florence waved to an estimated 50,000 ships. She began waving at age 19 and continued well into her sixties. She never married and some thirty years after her death the City of Savannah built and erected a permanent statue in Riverside Park on River Street along the Savannah River. This monument became the first monument to a Georgia woman in a state park. The stature was designed by Felix de Weldon, who also sculpted the Iwo Jima monument in Washington, DC. For more information see: http://onlineathens.com/stories/051709/liv_440649257.shtml#.WjBoBd-nGUk 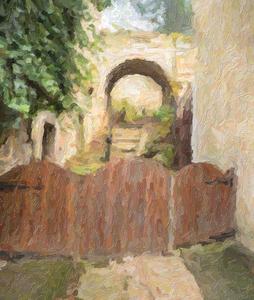