This week we are in Hóra, the capital of Mykonos, one of about 220 islands that make up the Cyclades which are a group of Greek islands southeast of the mainland in the Aegean Sea. My favorite islands in this group are Mykonos and Santorini. This week we go to Mykonos.
One of the first things to do when first going ashore at Hóra is to meet Pétros. Pétros is a white pelican, Pelecanus erythrorhynchos and has become an integral part of the island since 1954. It was in 1954 when a pelican injured in a storm was found by a fisherman. The fisherman nursed the pelican back to health but instead of flying away the pelican chose to stay around town and soon became the town mascot. After about 30 years of being admired by locals and visitors alike, the bird died. The town was in mourning so they set about finding another pelican. In fact, I was told that today there are actually 3 different pelicans strolling around town. The old harbor area seems to be a favorite place and is where I took picture A.
Picture B is Aghios (Saint) Nikolas church in the old harbor of Hóra. Almost all of the Greek islands have a church named for Saint Nicholas, the patron saint of sailors. This church was originally built on an islet in the port and around 1908 was connected to the quay.
Picture C: a typical street in the old town section of Hóra, narrow, whitewashed houses with colorful doors and windows frames.
Picture D: the Alefkántra, known as "Little Venice", is a row of 17th & 18th century captain’s houses along the Aegean Sea.
Picture E: Panayia Paraportiani church, situated above the harbor dates back to the year 1475.
Picture F: If I were to select an iconic photograph of Mykonos it would be the windmills sitting on a rise somewhat facing the Alefkántra and the Aegean Sea. Windmills were in full use from the 17th to the 19th centuries grinding mostly wheat and barley. It was said that at one time there were 28 windmills on the island, but now only 7 remain. 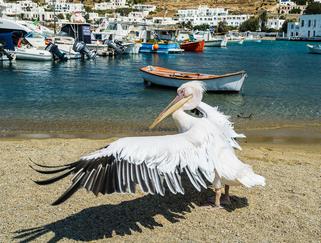 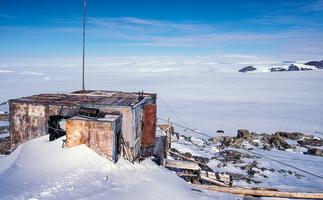 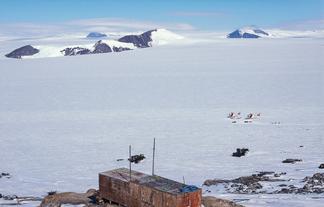 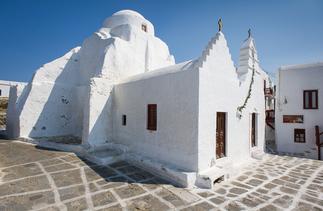 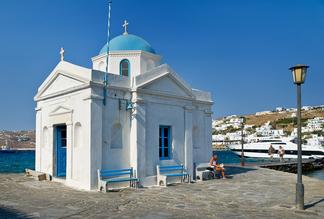 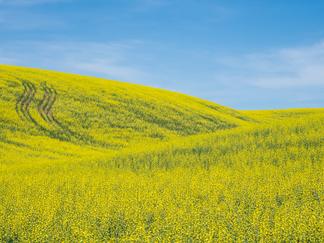 Often the unplanned becomes a highlight of a trip. January-February 2002 I was part of an expedition to the Ross Sea region of Antarctica onboard the Russian icebreaker, Kapitan Khlebnikov. Most trips to this region of the world have days built in for bad weather that inhibits a planned itinerary.
We were towards the end of our expedition, had been fortunate with the weather, and had not used all of our "bad weather" days so the captain decided to explore the Oates Coast before ending the expedition at Hobart, Tasmania. It was a beautiful day to utilize the two helicopters the ship had onboard, therefore we flew up over the high glacier to the abandoned Russian research station, Leningradskaya (GPS coordinates of 69°30’ S, 159°23’ E).
Leningradskaya station on Holladay Nunataks is a Soviet Antarctic research station, located on the northern shore of Victoria Land, at the Oates Coast. It was opened on February 25, 1971 by the members of the 15th Soviet Antarctic Expedition. It closed in 1991 due to lack of funding, but during its lifetime was host to studies of oceanology, glaciology, earth magnetism, and meteorology.
What is a numatak you ask? Well I looked it up and here is the definition: A  *nunatak* (from Inuit nunataq) and pronounced 'nana tak is an exposed, often rocky element of a ridge, mountain, or peak not covered with ice or snow within (or at the edge of) an ice field or glacier. They are also called glacial islands. The Holladay Nunataks which are about 3 miles long, occupy the central part of the peninsula between the terminus of Tomilin Glacier and the Gillett Ice Shelf.
Like a ghost from the USSR, the station is perched on this rocky outcropping and had been closed and abandoned for eleven years before we arrived. No doubt we were the first humans to return. Since we had a Russian crew, they elected to break-in the locked doors and have a look around. The abandoned station looked as if everyone got out of bed, grabbed some of their clothes and left. Books, video equipment, clothing, food, and supplies were all left behind. Maps and pictures were on the walls and additional food, clothing, and boots were still in the storehouse. The station consists of several buildings with living space, a radio station, a power station, a meteorological station, an upper-air sounding complex, a garage, and a warehouse. During its operation Leningradskaya had been resupplied by ice breaker ships that stop as close as possible in the icy sea below. Helicopters had to bring everything up to the station because it is about 1000 feet in elevation and about 2000 feet from the sea. Even the ice shelf at its lowest point is 50-60 feet high. People stationed at Leningradskaya were subject to persistent and severe winds and storms. Life was tough.
Pictures A, B, & C are some of the station building. Picture D is looking out across the snow covered glacier. It is 50 miles to the mountains tops in the distance. If you look carefully you will be able to see where our helicopters landed after dropping us off. Scattered in the snow are also the remains of two bulldozers and a crashed helicopter.

There were eight of us on a photo trip organized and led by Tim Grey to the Palouse region of Washington State. The Palouse is rolling farm country in the SW corner of the state. The weather for the next morning did not look promising. Rain clouds were predicted for that morning of June 9, 2017, so the odds were not good for our early morning shoot. It takes dedication to get out of bed at 3:15 to go photographing, but I did not fly across the country to sleep so a few of us in our group decided to take a chance. The others chose to sleep.
Our leader had scouted it out. If we were standing at the edge of a wheat field south of Uniontown we would find a photogenic red barn surrounded by winter wheat. Not so unusual one might say. However, the moon would be setting in the west behind the barn just before the sun rose in the east. If all of the parts to the puzzle fit together it might make for a nice picture. We were going to try.
Those of us who decided to take a chance and go were in place at the field by 4:30 AM. It was not promising because there were heavy clouds covering the moon. I took some pictures of the barn in the field only because I was there and there was nothing else to do while waiting. We began to notice that all might not be lost because there was a small band of open sky just above the wheat field. Maybe, just maybe, we might have an opening. Gradually the lower part of the moon became visible at the bottom of the clouds. As if by magic more and more of the moon revealed itself until there it was in all of its glory between the clouds and the wheat field. I took this picture at 4:56 AM. By 5:01 the moon was gone, which was OK because I had the shot that I had climbed out of bed so early in the morning to get.
I was pleased with the pink glow to the clouds, which was caused by the sun still below the horizon. The clouds were strikingly beautiful with the various shades of blue and pink. A clear blue sky would have allowed the moon to be photographed higher in the sky but would have been void of drama. 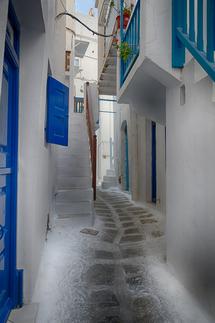 Back to Top
Back to Archives
Home 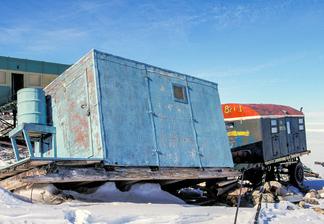 These are houses just below the Myrdal Station in Norway. Myrdal Station is a mountain railway station situated at the end of the local Flåm railroad. This railroad begins in Flåm, a village in Flåmsdalen, at the inner end of the Aurlandsfjorden—a branch of Sognefjorden. The village is located in the municipality of Aurland in Sogn og Fjordane county, Norway. (Note: fjorden is Norwegian for fjord)
The Flåm Line local railway provides a vital public transport link, but deriving a majority of its passengers through tourism. From Myrdal it is possible to transfer to another line going either to Oslo or to Bergen. We were on a half day round trip from the fjord below into the very scenic mountains above.
Let me digress; I was recently asked how I can remember so many facts about my pictures of the week. It is certainly not due to excellent recollection skills but it is based on my thorough record keeping. This particular trip was a round trip cruise from Southampton, UK on the Royal Princess 6/23-7/5/2002. I have maintained a file folder for every cruise that Margaret and I have taken as well as keeping a folder with details of each trip whether a road trip, a photo trip, or an overseas land trip. It is from these folders that I am able to dig up details of each picture. The folders fill 12 file cabinets in our basement. 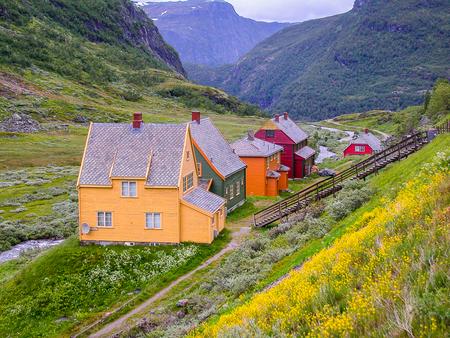 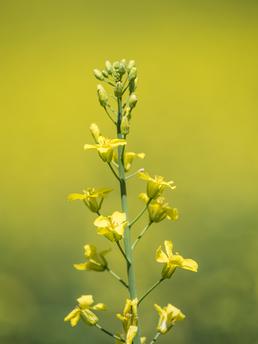 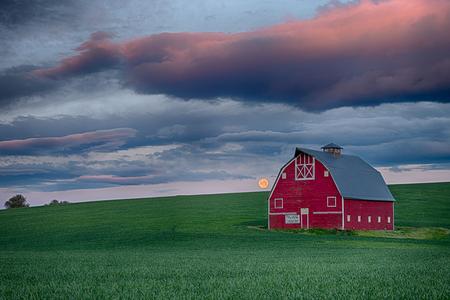 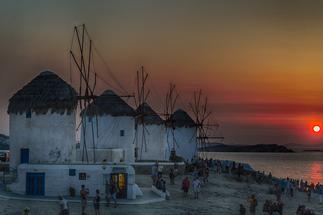 You are looking at a beautiful field of bright yellow flowers. Is it a field of rape or a field of canola? If the field is in the USA or Canada then the odds are that it is a field of canola flowers. If the field is in Europe, then probably rape flowers. The rape plant is a member of the mustard (Brassicaceae) family. In the early 1970s canola was first bred from rapeseed at the University of Manitoba in Canada. Many tests were performed and in 1998 a more disease and drought-resistant variety was developed using genetic modification. Wild rapeseed contains a large amount of glucosinolates and erucic acid, which is known to cause health problems. With this in mind the canola plant was developed to produce food-grade oil. Canola oil was originally called LEAR (low erucic acid rapeseed). For marketing purposes the name was changed from lear to canola, a word derived from the combination of Canada and oil (ola).
Canola oil works well as industrial oil and has been used in candles, soaps, lipsticks, lubricants, inks, biofuels and even insecticides. Later canola began being sold as an edible food product. Some people even claim that it is wonder oil, low in saturated fats and a source of omega-3 fatty acids. Then, there are others that believe its current hybridized and modified state can cause health issues. I am not taking sides in the health discussion.
I did find that canola growing in the rolling fields of SE Washington State known as the Palouse region was beautiful. These pictures are of a canola field along Long John Monesch Rd. off State highway #26 west of Dusty, Washington. 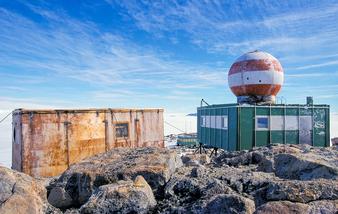