Chichicastenango is a small town about 87 miles north-west of Guatemala City. It is at an altitude of 6446 feet above sea level and is surrounded by mountain peaks and valleys. This town comes alive each market day which is Thursday and Sunday, with Sunday being the big event. While the Sunday market attracts its share of tourist, it is mainly for locals selling anything and everything from chickens and pigs to vegetables, grains, cloth, and home supplies.
On the other side of town from the market is a much different world. Entering through a white gate and a very sterile environment to the Cementerio General I was not prepared for the vibrant scene covering the hill. The cemetery in Chichicastenango is where I found the most colorful and beautiful cemetery that I have seen in the entire world. The brightly painted gravestones and crosses provide a rainbow of color to an otherwise somber place.
While Roman Catholicism is the predominant religion in Guatemala, it remains infused with Maya ritual. Many Masheños (citizens of Chichicastenango) continue to hold pre-Christian beliefs and choose to celebrate life and death the same way that their Maya ancestors did. Graves and tombstones are painted in the deceased’s favorite color, and shamans (spiritual and ceremonial leaders) can be seen burning incense, candles, and in special cases offering chickens to the gods. If a body isn’t properly buried, some people believe the soul becomes trapped between the realm of the living and the dead severing lines of communication.
According to indigenous Maya tradition, honoring the dead encourages the living to make peace with the inevitability of death. The colors themselves are steeped in symbolism. Did you know that Guatemala’s tombs are leased? If a family fails to pay the rent, grave-cleaners can exhume the bodies, package the remains in plastic bags, and transfer the remains to mass graves. 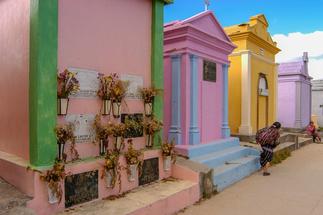 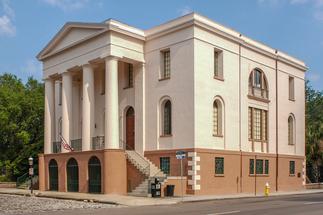 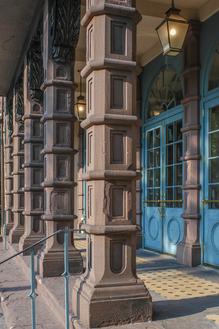 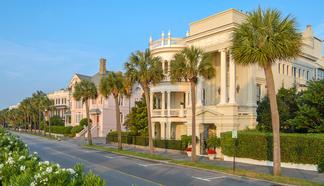 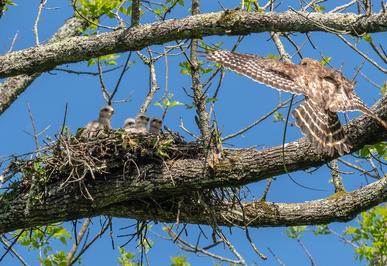 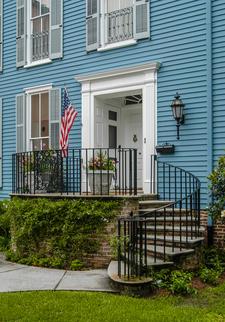 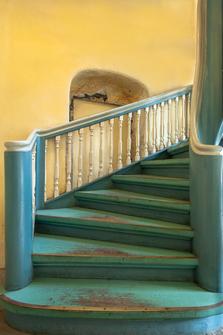 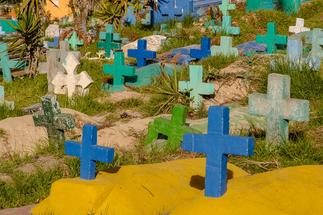 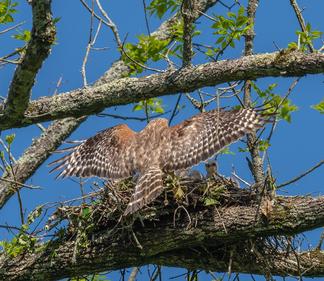 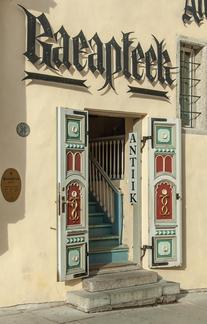 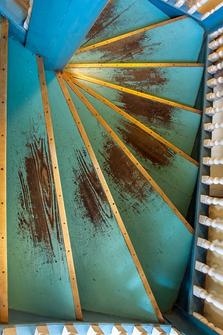 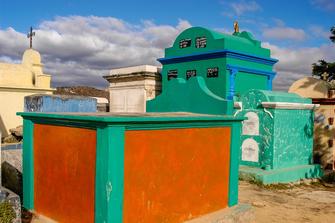 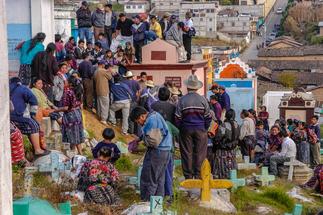 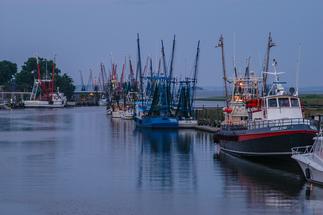 It was about a 1 ½ hour drive from my home in Sharpsburg to a place that I had never been, the Mill Creek Nature Preserve, which is located along the Mall of Georgia Blvd. in Buford, Georgia. It contains ponds, a flowing creek, as well as both pine and hardwood forests.
A pair of red-shouldered hawks (Buteo lineatus) had a nest high in a hardwood tree. There were four chicks which were large enough to be seen when they stretched their necks hoping for food. Notice how well nature camouflages these small birds thereby adding to the likelihood of survival. It was a waiting game for me as well as the chicks. After placing my camera on a tripod and setting the focus it was a guess as to which direction the adults returning to the nest would come from. The nest was more open to the east so that is the direction that I guessed would be used. It was a good guess.
A. the adult flew directly over me towards the nest and brought a frog.
B. the adult flew from my right and this time brought a green snake (Opheodrys aestivus). The snake looked to be 2 ½ - 3 feet in length.

Charleston, SC is certainly one of the most historical cities in the United States. It was founded and settled in 1670 by colonists from England. From its humble beginnings as a colonial seaport it grew mainly from the cultivation of cotton, rice, and indigo to a very wealthy city by the mid-eighteenth century. It was slow to recover from the devastation of the Civil War. However mainly due to the construction of a Navy Yard in 1904 it has regained its significance.
Charleston has a reputation unlike any other town that I know of in the United States. A lot of importance is placed on one's ancestors. Family names are of the upmost importance. Who was your grandfather? Who was your great-great grandfather? It has been said that anyone can move to Charleston and may be welcomed but they will NEVER become a true Charlestonian unless they have family roots there. It is the blue-blood family tree that makes a person a true Charlestonian. Money cannot buy entry into this exclusive club.
A.      East Battery is famous for its stately and mainly antebellum homes
facing the Charleston harbor.
B.      Typical house at 45 Meeting Street in the historic district of
Charleston.
C.      Dock Street Theater at 135 Church Street was built as the Planters
Hotel in 1809 and converted to a theater in 1935. The original Dock Street
Theater opened in 1736 and was the first building in America to be built
exclusively for theatrical performances. It was destroyed by the Great Fire
of 1740.
D.     The Fireproof Building, also known as the County Records Building,
is located at 100 Meeting Street, at the northwest corner of Washington
Square and Meeting Street. The building is believed to be the oldest
building of fireproof construction in the United States. It was the work of
Robert Mills, the first native-born American to be trained as an architect,
and a Charleston native. The building was renovated in 2016-2017 and now
houses the Carolina Historical Society.
E.      Shrimp boats along Shem Creek. Only a few boats remain tied along
the piers where once about a hundred were tied up. The captains and their
boats are getting old with fewer younger shrimpers taking over. The decline
is due mainly to higher cost and wholesale prices that have not kept up
with a very difficult trade. 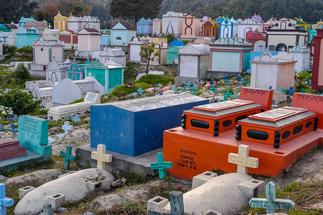 The Raeapteek (English: Town Hall Pharmacy) is in the center of Tallinn, Estonia. It is opposite the Town Hall and is one of the oldest continuously running pharmacies in Europe. It has been in business at the same location since 1422 and it is the oldest commercial enterprise and medical establishment in Tallinn.
The family that is most closely associated with the pharmacy’s history is the Burchart (Burchard) family. About 1579 a Hungarian immigrant named Johann Burchart Both Belavary de Sykava moved to Tallinn from present day Bratislava. He obtained a lease from the city to run the business of a pharmacy and purchased the Raeapteek from the prior owner. He also started a family tradition of giving the first-born son, who was expected to carry on the family business, the name Johann. In 1688 Johann Burdhart IV was able to purchase the leased building from the city for 600 thalers (a silver coin used throughout Europe for about 400 years). I could not find anywhere that gave me the approximate value of a thaler in today’s currency. Through the years the Burcharts have been well educated and were at times medical doctors as well as pharmacists. The pharmacy became legendary. It is said that in 1725 when Peter the Great was on his deathbed he called for Johann Burchart V to attend to him. However, the Russian tsar died before Burchart reached St. Petersburg.
When the last male heir, Johann Burchart X died in 1911 his sisters sold the property to
C.R. Lehbert bringing to an end the 332 years that the Burcharts owned and operated the business. Today the first floor is still a pharmacy selling mostly modern medicines. There is also a small museum on the first floor.
A.      Pharmacy entrance at 11 Apteegi in the center of the old town
B.      Stairs going from the first floor to the second floor

C.      Looking down from the top of the stairs 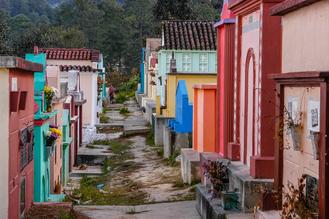 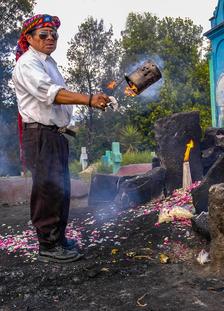