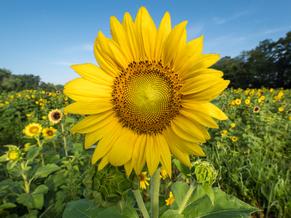 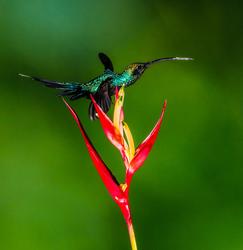 This week is sunflowers and more sunflowers. It was last week, about Wednesday June 14, 2017 that I received an E-mail on " Meetup"   from someone in my camera club, The Southeastern Photographic Society that a field of sunflowers was near its prime. The place was Copper Creek Farm, 1514 Reeves Station Rd. SW, Calhoun, GA. The farm is also a tourist attraction with farm animals, rides, and other things for the family. It typically opens the gates at 10 AM but would make an exception for members of our camera club and would let us in at 8 AM on Saturday, June 17th.  Of course I could arrive any time after 8 AM but why waste the warm early morning light?
While I have photographed sunflowers from time to time, I have never been able to work a large field at my leisure. This location was a two hour drive from my home. Did I really want to get out of bed at 5 AM to photograph sunflowers? After some soul searching and since the sunflower is my daughter, Kathi's favorite flower, the answer was "I should make the effort". I was not disappointed. Here are 8 pictures using a variety of lens and techniques.

The Egyptian revolution of 2011 was known locally as the *January 25 Revolution. *It began on 25 January and took place all across Egypt. There were millions of protestors with 846 people killed and over 6,000 injured. Egyptian President Hosni Mubarak finally resigned with the power being turned over to the Supreme Council of the Armed Forces. Mubarak was tried and found guilty of murder and other charges. He was later cleared of all charges in November 2014.
For some time Margaret and I had been talking about another trip to Egypt to visit Lake Nasser, a place that we had not been. Vantage Travel had been
offering a trip along the Nile and Lake Nasser with a departure November 20, 2011. As you might imagine, with the unrest taking place in Egypt, many
people were cancelling their tours. Most of my life I have been a contrarian: going where others do not want to go, selling when others are buying, and buying when people are selling. It has been said that I often march to a different drummer. After some research, I found out that the protests were not against tourist but the government and was taking place mostly in Cairo's Tahrir Square. I sensed an opportunity and found a nice
discount available if we signed up for this trip. "Let's Go"! So we did and took our daughter, Kathi with us. Most tourists had abandoned Egypt. In most cases our small group of 22 people was the only ones visiting the Egyptian sites. From our room on the 21st floor of the Sofitel El-Gezirah Cairo Hotel we could see a few fires burning in Tahrir Square and hear the unrest of the crowd there. On foot I roamed around Cairo but stayed clear of Tahrir Square. All around the country we had armed escorts, just in case. Bottom line, for the most part, we had Egypt to ourselves, and encountered not the first problem.
To illustrate my point I am attaching photos of three popular tourist attractions. (A) The Great Sphinx of Giza with the Pyramid of Khafre in the
distance. Pay attention to the absence of tourists. A typical day at the Great Sphinx is teaming with tourist. Not this time. (B) Front and entrance to Edfu Temple, c. 237-71 BC, 2nd largest temple in Egypt, no tourist to be seen. (C) Front of the Lesser Temple of Abu Simbel built by Pharaoh Ramses II for his Queen Nefortari, c. 1250-1269 BC. At last I have a person to show scale, it is the Egyptian gate keeper dressed in white to the right of the opening. The last picture (D) is looking out a window in the Bashawat Lounge on the riverboat ms Jaz Omar El Khayam sailing on Lake Nasser in Egypt. I have heard the saying that sometimes less is more. Perhaps that saying is true in this case. This picture is simple, but elegant (No, I did not straighten the table because I liked it the way it was). This is a beautiful boat with 76 cabins. The only people sailing this time was our group of 22 and one other couple. No doubt there was more staff than passengers. 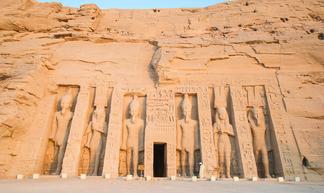 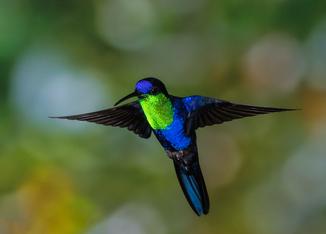 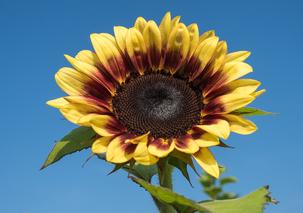 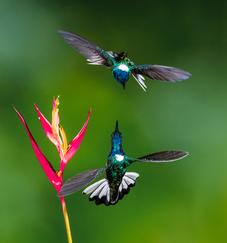 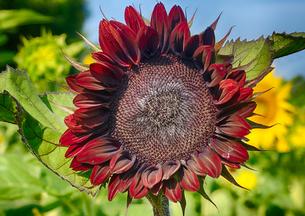 These are long-tailed jaegers at Svalbard, also known as Spitsbergen, which happens to be the main island in the archipelago of Svalbard that was first discovered by the Vikings in the 12th century and is located between Norway and the North Pole. The largest town is Longyearbyen which was formed to support coal mining in the 1920's. Svalbard is home to seals, foxes, reindeer, walrus and polar bears. There are no trees on Svalbard but flowers grow profusely in the summer. It is by far the best place that I have been to see and photograph polar bears.
These pictures were taken at Kongsfjorden, an inlet on the west coast of Spitsbergen in the Arctic Ocean. The inlet is 16 miles (26 km) long and ranges in width from 3.7 to 8.6 miles (6 to 14 km). At the head of the fjord are two mighty glaciers that calve into the sea, Kronebreen on the left and Kongsvegen on the right. The bird is a long-tailed jaeger, Stercorarius longicaucus (the jaeger is called Skua outside the Americas) at a nest on Kongsfjord in Svalbard. The nest is nothing more than a depression in the rocky ground. The long-tailed is the smallest of the three jaegers. It is 18-21 inches in length. It has a slightly hooked bill, webbed feet, and 6-10 inch long pointed center tail feathers that stick out beyond its other tail feathers.
I walked among several breeding pairs in the surrounding Arctic tundra. One nearby nest had 2 eggs and they were defending it from intruders such as me. Good thing that I had on a hat or the bird would have drawn blood with its sharp beak. A fellow traveler took the picture of me while I was photographing the birds. 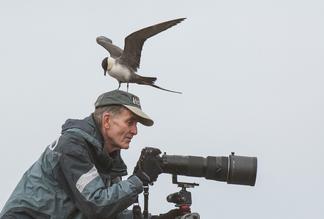 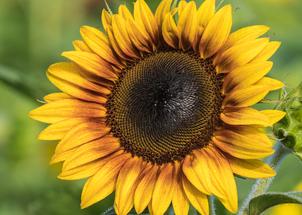 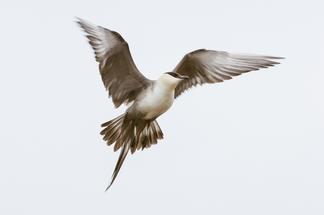 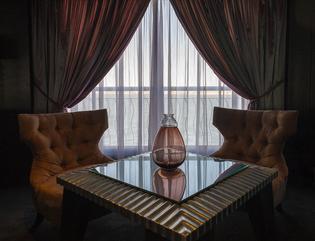 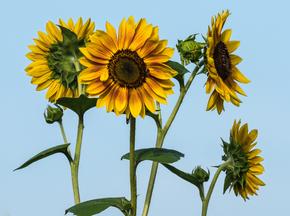 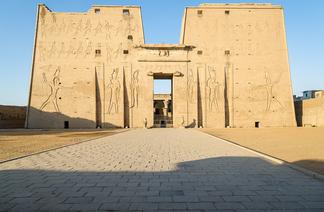 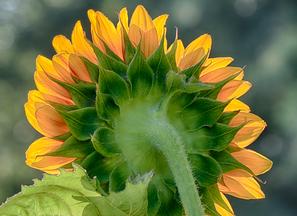 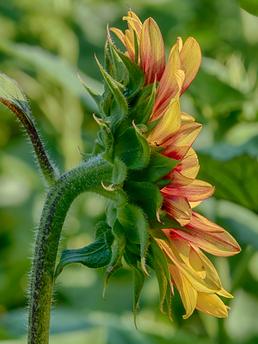 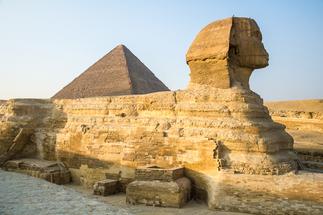 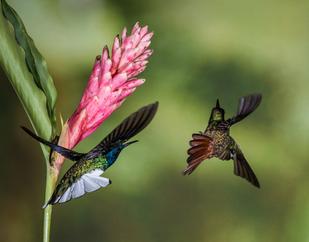 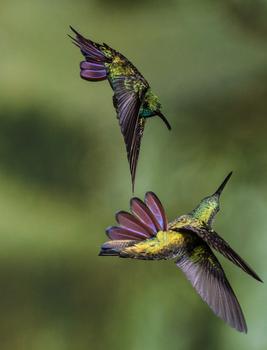 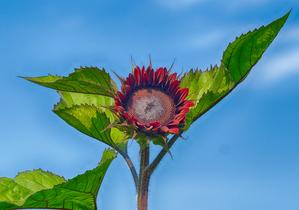 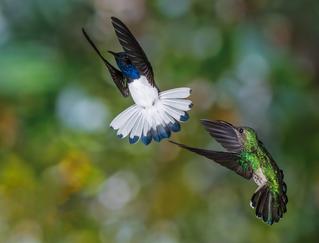 Margaret may have shared one or two of these pictures with some of you from an email that I sent to her from Costa Rica.
I am fortunate to share my habitat here in Georgia with the pretty ruby-throated hummingbird, which is our only resident hummingbird. Occasionally a rufous hummingbird will wander off of its migratory course and be seen in Georgia, but I have never seen one. This past April, I was one of eight photographers in Costa Rica on a Joseph Van Os Photo Safaris trip. Our tour leader, Mark Thomas, set up three small Vivitar flash units on a porch at the Rancho Naturalista Lodge where we were staying. The flashes were in manual mode and set to 1/16th power. Our cameras were also set to manual mode and used a transmitter to fire the flash units. A hummingbird feeder was then placed in the scene. Two people at a time would take turns photographing the hummingbirds as they came to the feeder.
Over the years I have tried with only limited success in photographing hummingbirds in flight. Even at 1/4000 sec. the wing feathers would be blurred. With Mark's flash setup, and my camera shutter speed set to 1/250 second sync speed, the flash duration was so fast (about 1/10,000 sec.)
that the bird wings seemed frozen in motion.
The other factor that led to our success was a lot of hummingbirds. Birds came to our feeders in droves. It was rare when a bird was not in sight.
What took some timing was to figure out when a bird would be in the desired location and fire the camera BEFORE the bird arrived. Another trick was to recognize which area would be in focus. The camera was pre-focused on a certain area because auto focus would be too slow.
Attached are six examples out of hundreds of hummingbird pictures.
A.   Crowned Woodnymph        B.   Green-breasted Mango        C.   Green Hermit and bird of paradise flower
D.   White-necked Jacobin (male & female)        E    White-necked Jacobin and Green-breasted Mango w/torch lily
F.       White-necked Jacobin males fighting over nectar in bird of paradise flower