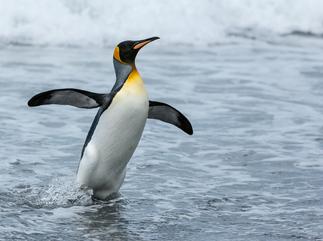 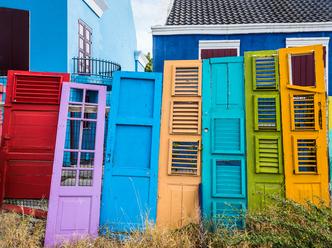 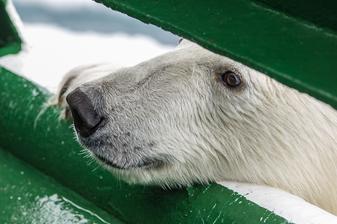 It was a very close encounter with a polar bear! I had flown to Longyearbyen, Spitsbergen in the Arctic to join a nine-night expedition onboard the Professor Molchanov, a Russian ice-strengthened oceanographic research vessel. The ship had been re-configured for passenger use with 26 cabins carrying a maximum of 52 passengers. Depending on the ice conditions we were going to attempt a complete circle around the island of Spitsbergen (also known as Svalbard).
Other than to photograph scenic fjords and mountains, our main focus was to find polar bears, walrus, seals, and birds. If I remember correctly we saw a total of 61 polar bears. I took my daughter two years later and we saw only seven polar bears, so it could be said that the first trip was an abundant polar bear trip.
The second day at sea, June 30, 2006 the captain pushed the ship up in the sea ice while we observed bears moving about on the ice. One of the bears ambled up very close to the ship to check us out. He lay down on the ice and give us a good long smell. Over a period of about a half hour we were presented with a variety of poses such as picture “A” seen here.
Then the bear stood on its hind legs next to the ship. WOW! I had no idea they were so tall. All of us were hanging over the ship’s guard rail trying to take pictures. The bear happened to be directly in front of the fellow standing next to me. Preparing for a few super close-up shots I had changed to a 105 mm micro lens. Suddenly in a split second the bear put his paw on the side of the ship and turned his head sideways pushing it through the small opening along the side of the ship. The bear grabbed at the leg of the man to my left but managed only to grab his loose wind pants. Whew! The baggy pants saved his leg because the bear only tore off a portion of the pants. It happened so fast that the man did not realize what had happened until after the fact. When reality struck him he then saw how close he became to be the bear’s dinner. Picture “B” was taken a second or two before the bear grabbed the man’s pants.
After word got out what had happened no one ever again stood next to the edge of the ship when a bear was close by.
Polar bear on the ice
Polar bear with his head through the side of the ship 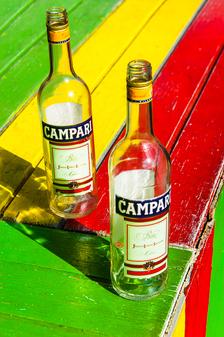 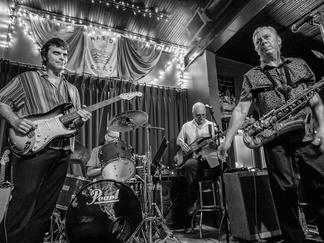 King Penguin in the surf at St. Andrews Bay

King Penguins, one standing and one walking by at Sallisbury Plain 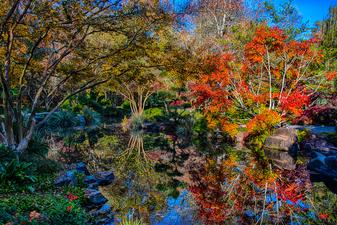 The Caribbean Islands are awash in color. I remember that a woman selling fruit nearby asking me why I was taking a picture of empty Campari bottles. I really could not give her a good answer other than I liked it. Her puzzled look said volumes – such as; “what a nutty tourist taking pictures of empty bottles”.
So this week’s theme features two fine art photography examples that a lot of people would never consider photographing. The Campari bottles were sitting on a table in a local market in St. Georges, Grenada. This is exactly the way that I found the scene. I did not touch or rearrange the bottles. What caught my eye was the shape of the bottles against the lines and colors of the boards. Then add a shadow and it becomes even more interesting.
The second example is seven old wooden window shutters in the grass leaning against a fence in an empty lot above Mathey Wharf in Willemstad, Curaςao.  The lot was filled with junk scattered here and there. From the street it did not look like much. Still I made the effort to walk through the weeds and junk for a closer look. I found a few old tires to photograph and as I was turning to walk away the sun went behind the clouds. With less contrast the shutters began to look better. It took a few minutes walking around to find an angle that I liked. That angle was to back away, kneel in the grass and add the buildings for the background.

No doubt everyone has heard the saying "In the middle of nowhere". That is a perfect description of this week's destination. South Georgia Island is a very remote and inhospitable island in the southern Atlantic Ocean. The island is 967 miles from the Falkland Islands, 1257 miles from Ushuaia, Argentina, 2579 miles from Antarctica, and 3331 miles from South Africa. It is about a 100 miles long and narrow varying from about 1 - 23 miles in width. There are no native inhabitants. The main  settlement is Grytviken, established in 1904 as a whaling station which operated until it closed in 1966. Grytviken is littered with whale bones and rusting machinery. A small museum can be found in one of the buildings. A small Norwegian Lutheran church built in 1913 is still maintained. The church had a cameo appearance in the movie "Happy Feet". Grytviken has the best sheltered  harbor on the island and with enough flat land to construct a few buildings. Most of the island terrain is mountainous and without trees. There is snow most of the year. South Georgia is an excellent breeding ground for elephant seals, fur seals, and an estimated 500,000 king penguins.
Similar to Antarctica, the weather can change within the hour from sunny to snow to sleet to stormy. Our 6 days in South Georgia were part of a 3 week expedition January 2008 on the *MV Ushuaia* that included the Falkland Islands and Antarctica. I reviewed the expedition log to remember the particulars.
Early morning when we arrived to the western side of South Georgia Island at Salisbury Plain we were greeted with heavy fog, icebergs, and choppy seas. Luck was on our side because about lunch time the skies began to clear and the seas calmed down. The next morning was again beautiful weather at Salisbury Plain. At noon we repositioned to Fortuna Bay only to be greeted by a howling katabatic wind of 70 MPH coming off of the mountains. The ship captain managed to tuck the ship into the lee of the mountains for another splendid time ashore. And so it went. Approaching St. Andrews Bay we had rain and sleet during the night and early morning only to clear for excellent photography ashore. St Andrews Bay has the largest king penguin colony on South Georgia and we managed to land not once but twice. We were told that even one landing at St. Andrews Bay was a major achievement because of the mountainous surf, truly awful weather, or a monstrous swell next to the ship. We made other landings as we worked our way around to the east side of the island and Grytviken. Those who are familiar with the polar explorer, Sir Ernest Shackleton, might know that he died of a heart attack in 1922 while visiting Grytviken and is buried in the small graveyard there. After visiting his grave I was struck by how few visitors have viewed his grave due to its remoteness.

This week is a real change of pace. Not only is it about my son Ken Kilgore but also the photos are shown in B&W. The pictures were captured in color, but the house lighting was a mixture of colors that made the photos look a bit weird. So I converted them to B&W which worked much better. This is Ken & the Shadows playing at Blind Willie's at 828 North Highland Avenue NE, Atlanta, GA 30306. The Shadows are: Kenny Kilgore (front left), guitars; Bill Stewart (back left), drums; Roger Gregory (back right), bass; Albey Scholl (front right), tenor sax, harmonica, and vocals.  While the Shadows can play just about any genre of music, they are mainly a blues band.
Blind Willie's opened its doors in the Virginia-Highland's area of Atlanta in 1986. From the beginning it has featured live music bringing in local, regional, and national performers. It did not take long for Blind Willie's to become famous as a blues club with many of the blues greats having performed there. The club was awarded the 1997 Blues Club of the Year by the Blues Foundation, an American nonprofit corporation headquartered in mphis, Tennessee.
Ken's given name is Ken but his stage name is Kenny. Not sure how that came about. He got his first guitar when he was 6 years old and has never wanted to do anything but be a musician. Beginning about age 14 he worked after school and Saturdays at a music store. We bought Ken his first professional quality guitar, a 1974 Gibson Les Paul Deluxe Goldtop in August of 1977, three months before his 12th birthday. He says that he will never sell that guitar and still plays it for recording and session work from time to time. If you want to sample his music or read some of his bio, his web site is: http://www.kennykilgore.com
A.      The Shadows taken at 9:52 PM
B.      With Francine Reed (front right) at 10:12 PM
C.      Kenny taken at 9:49 PM 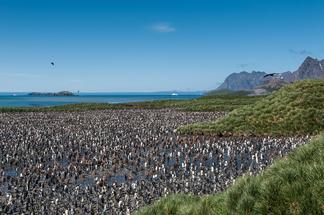 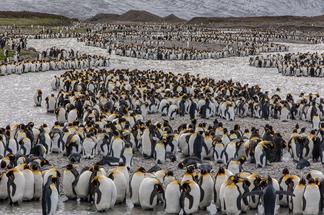 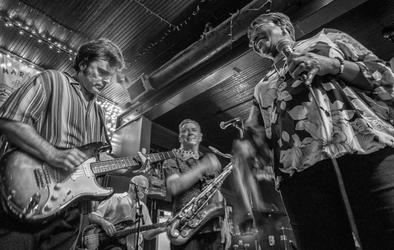 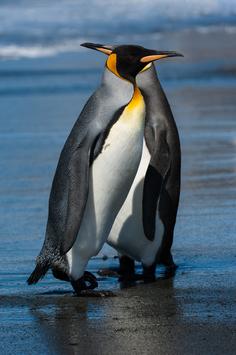 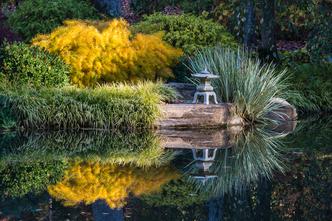 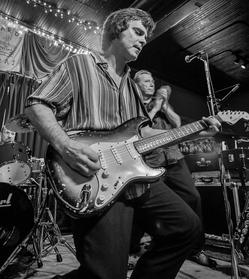 These pictures were taken at Gibbs Gardens, 1998 Gibbs Drive, Ball Ground, Georgia on October 30, 2014. This is the estate of Jim Gibbs that is
situated on 220 acres in the foothills of the North Georgia Mountains. The garden is about a two hour drive from my house. Gibbs Gardens is divided
into 16 different theme gardens such as the Japanese Garden that you see here. The daffodil display in early spring will rival any throughout the
world. 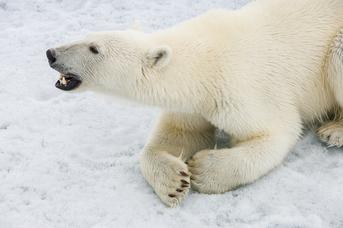