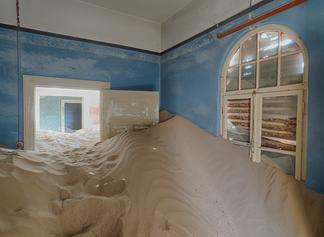 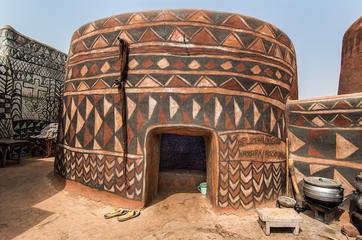 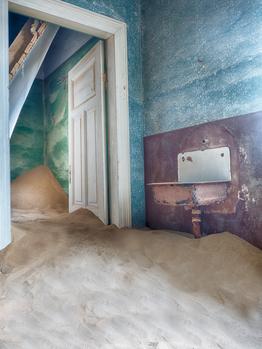 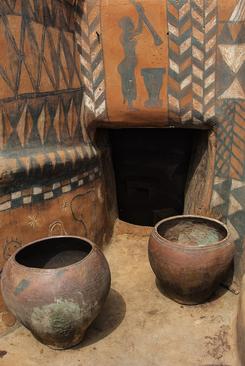 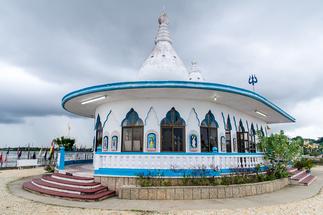 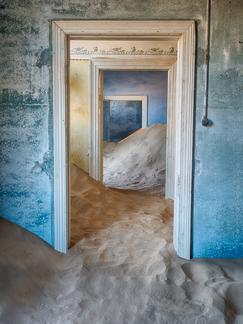 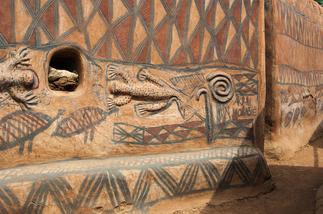 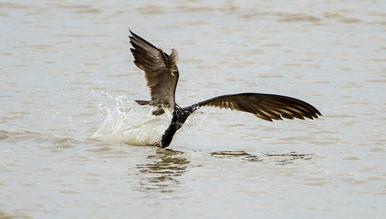 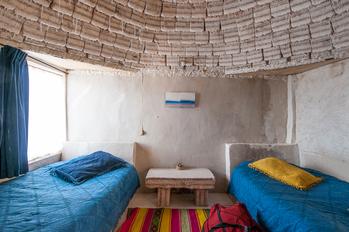 May of 2011 I was photographing on the island of Trinidad.  Our local guide took us to a popular tourist attraction, the Sewdass Sadhu's Temple in the Sea located on the Gulf of Paria in Trinidad. Sewdass Sadhu was an indentured laborer who came to Trinidad in 1907. He built his first Hindu temple in 1947 on land owned by the sugar cane company, Tate and Lyle. He was charged with trespassing and fined $100 or 14 days in prison. His temple was torn down.
Not to be denied, he declared that if he could not build his temple on land then he would build it in the sea. Sadhu began work with two buckets and an old lady's bicycle with a carrier on the back. He constructed a path 500 feet into the sea where he slowly built his temple. In 1994 the state and private businesses joined forces to renovate and repair the temple that we see today. The Temple in the Sea has been described as the first of its kind in the western world.
I took a few pictures of the Temple in the Sea and noticed some black skimmers flying over the water near the temple. So for about an hour I stood next to the water and photographed these feeding birds. It is a beautiful sight to watch black skimmers fly just above the water with their lower bill skimming through the water trying to scoop up a fish. The trick was to first get the camera to focus on the bird as it approached. With the camera set to capture at a continuous shutter speed, at the appropriate time the shutter would be pressed and a series of three to six shots would be fired. If I timed it right I would be rewarded with a series of birds in flight that were in focus. If I was really lucky the bird would catch a fish as it passed. I do not know how many shots I took because I have long ago deleted those that were not in focus, but of the 87 that I kept only three birds caught a fish as I was photographing it. Was I lucky? You bet, but I have always liked a quote by the Greek philosopher, Senca: "Luck is what happens when preparation meets opportunity".

Above is a series of four shots all taken in less than a second, and shown in the order captured.

This week we visit the village of Gurunsi of the Kassena people in the Tibl region of Burkina Faso in West Africa.  This is the southeastern part of Burkina Faso near the border with Ghana. The Kassena people make some of the most beautiful, painted, mud buildings that I have ever seen.
Gurunsi is not a large place. The village is about 1 hectare or about 2 acres in size.  The structures are made with a sun-dried mix of clay, soil, straw, and cow dung moistened to a perfect mortar mixed by foot. This creates a strong pottery-like structure. Other indigenous people around the world use mud-brick construction where layer upon layer are added when needed to maintain the necessary wall thickness to withstand rainstorms and extreme temperatures. They use short walls as urban landscaping elements to provide a buttressing support.
The Gurunsi go a step beyond by making their structures a work of art. It is mostly the women who paint and decorate their houses. The intricate ornamentation that covers the exterior of the buildings is painted with colored mud and chalk. It can tell an expressive story of the ancient tribe's culture or can illustrate just about anything from objects used in normal daily life, to religion and beliefs.  The artwork can be embossed with rocks and etchings that highlight the designs and makes each house unique.
While the houses are built close together, most do utilize the flat mud roofs for tasks such as drying grain and processing crops. There often seemed to be two cooking areas. One fire place is outside the house and one inside. I would suppose that the weather and temperature would determine which would be used. I visited the interior of two houses. Both were dark with few personal objects other than some clothing, bowls, pots and gourds. Both houses had mud floors but were very clean and neat.
A - Houses of Gurunsi
B - House entrance
C - Exterior details
D - Sleeping and living area
E - Grain storage building
F - Woman working on the roof of a house 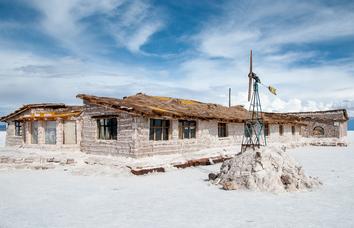 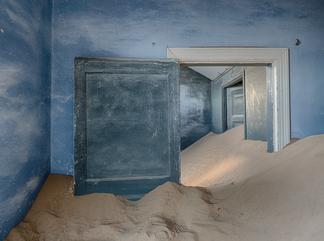 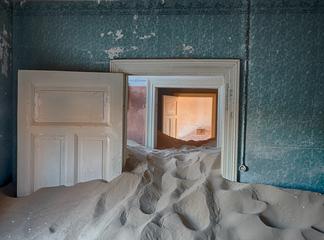 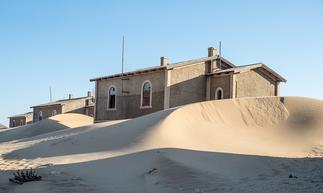 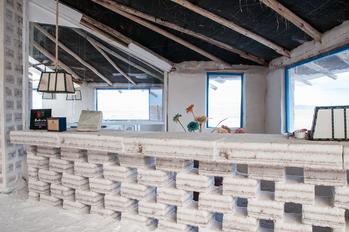 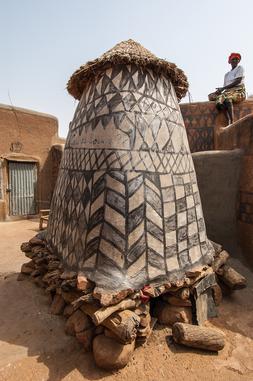 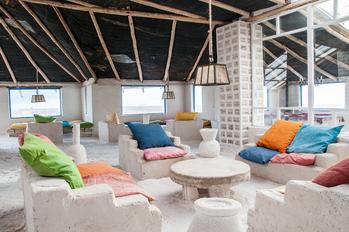 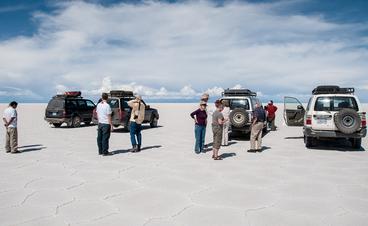 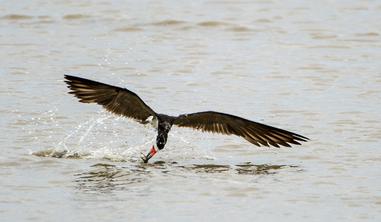 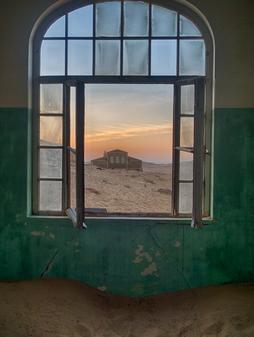 Salar de Uyuni, amid the Andes in southwest Bolivia, is the world's largest salt flat. It is 100 times the size of the Bonneville Salt Flats in Utah, USA. Nearly 11,000-sq. km (4,247 sq. miles) in size, it was formed from the remains of a prehistoric lake that went dry, leaving behind a desert like landscape of bright-white salt, rock formations and cacti-studded islands. There are few places on earth that are as flat. The variation of the surface elevation of Salar de Uyuni is less than 1 meter (3 ft. 3 in). The altitude above sea level is 3,656 meters (11,995 ft). Its otherworldly expanse can be observed from central Incahuasi Island in the middle of the pan. The expanse of the salt flat is so great that when one is near the center, mountain ranges 30 - 50 miles away cannot be seen, only salt as far as the eye can see. We drove across the expanse and although the drivers knew where they were going, I would not have been able to navigate without a GPS to guide me. Salar de Uyuni has a salt crust that ranges between a few centimeters up to 10 meters (32 feet) thick. The depth ranges from 2 to 20 meters or 7 to 66 feet thick.
Lake Poop is a neighbor of the much larger Lake Titicaca <https://en.wikipedia.org/wiki/Lake_Titicaca> bordering Peru and Bolivia. During the wet season, Titicaca overflows and discharges into Poop, which, in turn, floods Salar de Uyuni. The area has a relatively stable average temperature with a peak of about 21C (70F) in November and a low of 13C (55F) in June. Rainfall is low with January being the highest with 2-3 inches (5 - 7.6 cm). Unfortunately, when I was there it was mostly dry. We had one light rain so the unique mirror reflections that I had hoped for were not to be.
From 1993 - 1995 there was a hotel made of salt near the center of the salt flat. However, it was removed because of sanitation concerns. All waste had to be collected manually and removed. We stayed at the present Palacio de Sal (Palace of Salt) which was built in 2007 near the edge of the salt flat. I have attached some pictures of this most unusual hotel. The walls, floor, furniture, stairs, tables, and beds are all made of salt blocks.
A. Salt Flat: taken February 19, 2009
B. Rest stop on the salt flat
C. Exterior view of the Palace of Salt
D. Hotel reception area
E. Hotel lobby
F. My hotel room
G. Salt flat after light rain 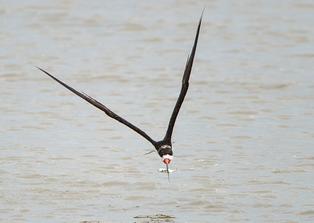 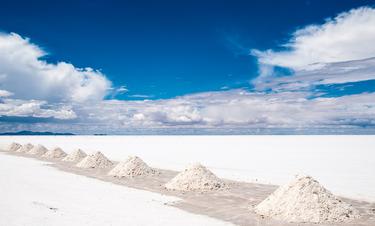 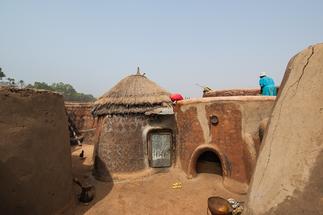 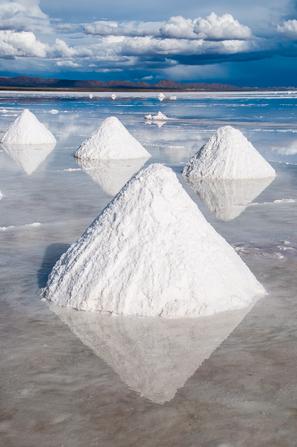 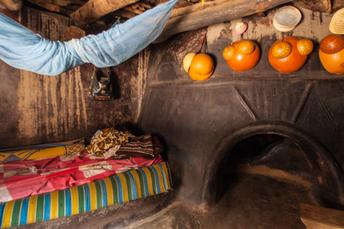 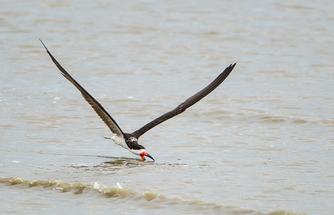 Today we visit a most unusual ghost town. It is the African town of Kolmanskop in Namibia. It was erected in two short years from 1908 to 1910 by August Stauch, a 30-year-old railway superintendent.  A local worker, Zacharias Lewala, is credited to having picked up the first diamond and thought it was a rather pretty and shiny little stone. He showed the stone to Stauch who suspected that it might be a diamond.  Stauch cleaned the stone as best he could and took it to a government geologist in a town up the coast. Just in case, before he showed the stone, he bought licenses which allowed him to stake out claims in the sand. Because Stauch was looking with his eyes wide open he saw what others had simply walked over for years. Diamond fever soon began. At first stones were collected from the surface of the sand. Later the digging went deeper. With the riches Stauch built the town of Kolmanskop to support the mining.
Kolmanskop was staffed with highly skilled and experienced professional white-collar workers with families. The town had a hospital, school, recreation club, ice factory, and a storehouse stocking everything from riding britches to cheese. It had running water, electricity and an electrically driven narrow gauge railway. Houses for these workers were very modern for the time and well made using the best available materials and designs. Even the less skilled single workers had nice buildings in which to live.
So, how did the flourishing town finally succumb to the desert? This region of southern Africa was a German colony and upon the outbreak of WWI the entire diamond mining industry was shut down. After the war mining was resumed but now the surface collection was no more and diamonds had to be mined. By 1930 came the depression which ended what few diamonds that were to be mined. By 1938 Kolmanskop closed down for good.  Anyone building a house in the nearby town of Luderitz could collect free doors, windows, floor board, and roof beams from the buildings of the abandoned town.  It was a free-for-all. In 1979 it was decided that the town could be a tourist attraction so a bit of safety repairs were made. However, no one told the sand. With each wind storm, sand would blow into the buildings through open windows and open doors.
I first visited Kolmanskop in 2001. The pictures that you see here are from my 2016 visit, which was a Joseph Van Os Photo Safaris tour where we had been granted entrance from daylight to dark. As I recall, the posted visiting hours are from about 10 AM to 3 PM each day. Today there is certainly more sand in the buildings than it was in 2001. I remember 15 years ago during my first visit standing in an outbuilding with my tripod and taking a picture with B&W film. This visit the sand was so deep in that same structure that I could not even go inside unless I was on my hands and knees. The attached pictures show some of the Kolmanskop buildings, but perhaps one needs to actually go there to appreciate the haunting realty that the desert has created.