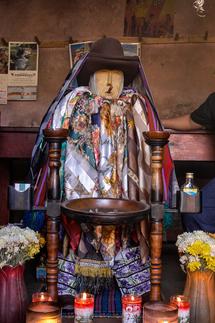 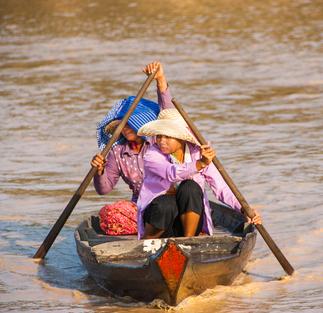 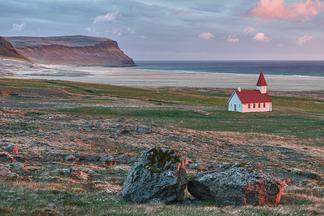 Cambodia is a very interesting destination for a photographer. No doubt the iconic picture that says "Cambodia" is Angkor Wat with the lake in the
front. I have that picture as well but this week I am going to feature something different. Attached are three pictures of the Cambodian people.
First, let me share a little background. The temples of Angkor were built between the 7th and 11th century when the Khmer civilization was at the height of its extraordinary creativity. The Kingdom of Cambodia is today an independent country with a population of more than 7 million people. It was once a French colony, and is the least known Indochinese country.

A.      Cambodia Folk Show at the Angkor Mondial Restaurant in Siem Reap, Cambodia.  I am squatting down on the floor to be eye level with the dancers.  There are seven dancers but in this picture I chose to feature only two.

B.      Two women are paddling a boat in Tenfe Sap Lake. I am in a boat going in the direction from which these women have come. They left a floating village in the lake and are rowing facing the afternoon sun. They are rowing against the current so are having to row hard. They still have a long way to go before reaching their destination.

C.      Local boy playing in Angkor Wat. The boy is in a door of the Citadel of Women or Banteay Srey. This is a 10th century Hindu temple dedicated to the destroyer God, Shiva. The boy was exploring the temple while his mother was working on the grounds surrounding the temple. If I would have been able to pose him, I could not have done it any better. Notice how far the step is below the door's threshold. He is trying to keep his balance while reaching his foot for the step. I also love the way he is looking off to the side and paying no attention to me even though I was  squatting down a short distance away. 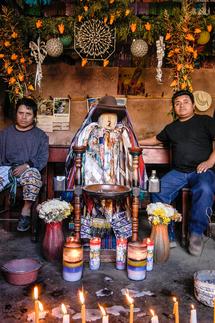 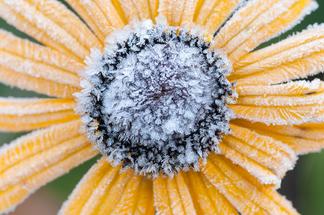 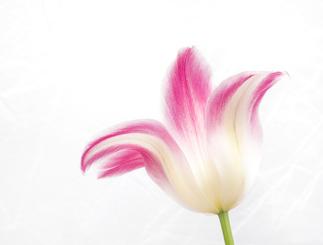 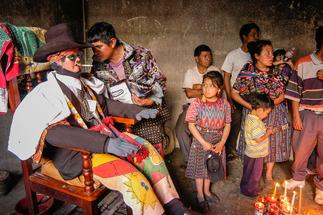 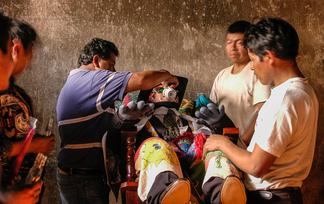 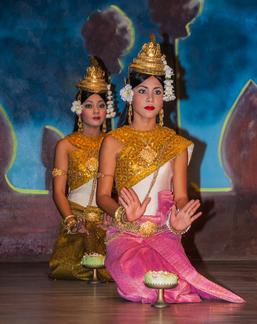 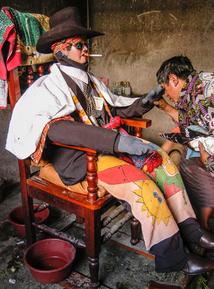 Who or what is Maximón? Maximón is also known as San Simón, a Mayan folk saint or Mayan deity found in several towns in the highlands of WesternGuatemala. When Margaret and I were in Guatemala in 2003 we saw two different forms of *Maximón.*  We were told that there were a total of four*Maximón* effigies in the country. The creation of *Maximón* is called a mixture religion beginning with the pre-Columbian Mayan Indians and mixed with Catholicism from Spain.
*You will find Maximón in a different house each year. It is a great honor to have him for a year. A room in a house is set aside for Maximón, an altar, and various sacred items. There are always two people serving as attendants.  He is put to bed each night and dressed each morning with both traditional Mayan clothes and modern clothes. He is always smoking a cigarette or cigar. Visitors come to ask for his favors such as good health, good crops, new motorcycle, marriage counseling, etc.  Worshipers pay homage by offering spirits, cigars, cigarettes, candles, incense, prayers, and of course money to gain his favor. Throughout the day his attendants remove the lit cigarette long enough to pour spirits such as quetzalteca or rum in his mouth.*
*The Catholic Church takes a very dim view of Maximón. While, I am Christian and active in the Methodist Church, I am also very tolerant when it comes to other religions. From our travels to the nooks and crannies of unusual places around the world, Margaret and I both find other religions fascinating. We lways try to learn and understand, never to judge or criticize. By the way, we were told by our guide that people who disrespect
Maximónn had very bad things happen to them.*
A.     *Maximónn with two attendants in Santiago, Guatemala near Lake Atitlan."
B.     *Maximón sitting in his chair taken January 18, 2003 at 12:19 PM."
C.     *Maximón in Zunil, Guatemala. Note the little girl's eyes as she watches the shaman talking to Maximón.*
D.     *Maximón being fed spirits" 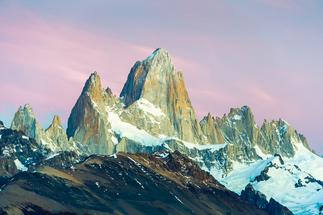 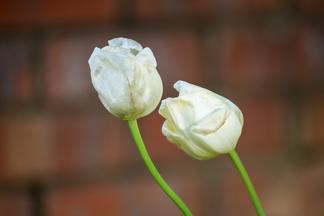 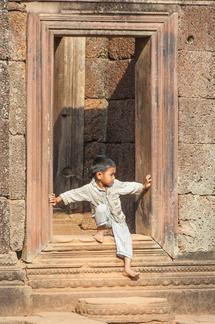 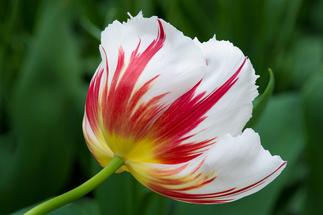 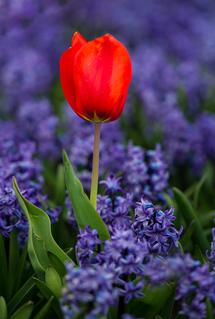 This week will feature flowers. Not just any flowers but each flower was photographed with a different purpose in mind.
A.      Blue grape hyacinths growing in a field in the Netherlands. This was a large field with a lone red tulip growing among the blue. To make the tulip stand out even more I chose a shallow depth of field.
B.      I do not know the name of this flower. If someone knows please let me know. It was photographed at Kukendorf Gardens in the Netherlands.
C.      This tulip was at Kukendorf Gardens. My objective was to capture the wonderful combination of red, yellow, and white all in sharp focus.
D.     Again we are at Kukendorf Gardens. This picture uses a white wall for the background. I was looking for a somewhat wispy or feathery rendering often referred to as "High Key".
E.      I saw these flowers about a mile from my home while walking the dog. What caught my eye was the brick mailbox in the background. I kept thinking how the bricks might look if they were out of focus. Certainly a more striking flower would have helped, but the idea is to consider using different backgrounds and see what happens.
F.       A Rudbeckia flower with the first frost of the fall season. It was taken in my front yard. 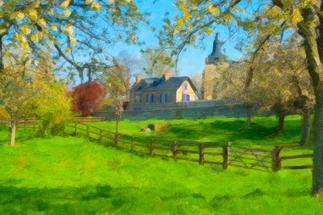 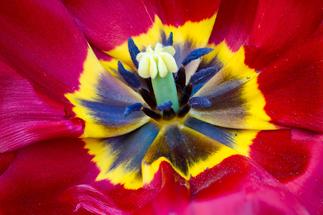 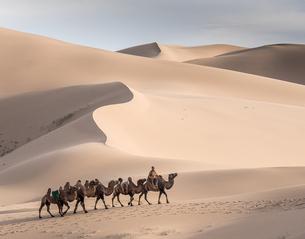 Landscapes from around the World

I suppose that the 100th week might be considered some kind of a milestone so I chose a subject that most people seem to like, *Landscapes.* For variety, each image is different in subject matter and from a different region of the world.

A.      These are Bactrian camels in Khongoryn Els, Mongolia. The camels are walking through the largest sand dunes in the Gobi Desert.
B.      This is a church at Breidavik, Iceland. It was taken June 26, 2013 at 12:28 AM (no, this is not a typo, it was after midnight). The sun was
off to the right and low in the horizon giving a warm light to the rocks in the foreground as well as the church in the distance. The sea at low tide, cliffs, and clouds all add interest to the composition.
C.      How about a change of pace? This is the French countryside. The cherry trees are in bloom near Honfleur, France.
D.      You are looking at the Fitzroy and Cerro Torre peaks in the Patagonia region of Argentina. These two peaks are Fitzroy, the higher on the right, and Cerro Torre seen on the left. They are quiet famous due to their awe-inspiring beauty and accessibility.  Rich and colorful mountaineering history makes them a magnet for both trekkers and climbers from all over the world. I made this picture while standing along the road leading to the nearby town of El Chalten where we had been staying for several days. This was the first day while we were there that clouds did not hide at least part of the mountain range. 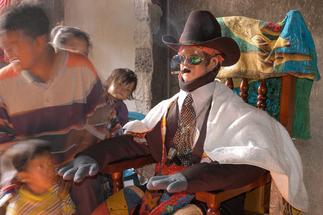