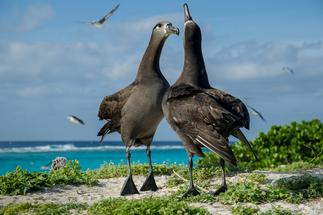 Railroad tracks next to the B4 desert road in Namibia. The location is between Luderitz and Aus, which is a distance of about 70 miles.
Railway building in Namibia began with some smaller mining rail lines in 1885. The state railway line construction began to connect these small lines to better serve the mines. This Luderitz Railway Line was originally built by the Germans in 1905 - 1907 using mostly prison labor.
In January 1904, the Herero people rebelled against German colonial rule. Origins of the Herero revolt date back to 1880's when tribes settled in Namibia came under pressure from the growing number of German settlers wanting their land, cattle, and labor. The Germans finally adopted a policy to sweep the bush and capture or kill all of the Herero people. Thus, the
Shark Island Concentration camp near Luderitz was formed.
The railroad was built with concentration camp labor from Shark Island. Shark Island concentration camp lacked proper nutrition and medical facilities. The German Colonial Administration records show that a total of 2,014 concentration camp prisoners were used in the railroad construction project between January 1906 and June 1907. Of those prisoners 1,259 died
while working on the line. That is a 67% mortality rate. No wonder this concentration camp was called "Death Islandby the local Herero people.
After being used for about 90 years the railroad was finally abandoned in 1997 due to lack of maintenance and the desert encroachment.
Work began in 2001 to reconstruct the railway with plans to reopen it in 2017. The portion that you see here was built about a year ago. Look how much sand has moved in the span of a year. Once the sand is cleared and the rail is open it will take constant sand removal to keep the line open. There has been some discussion of building a tunnel in a few of the heavy
dune areas.
A: Dunes cover the tracks:
B: Dunes encroachment in the distance 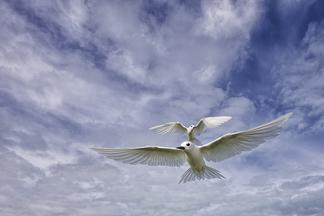 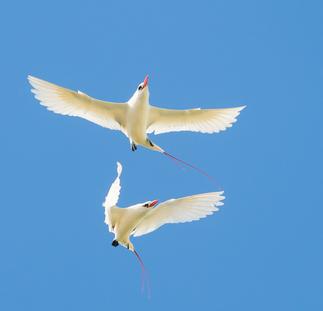 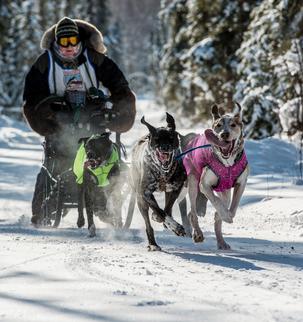 Before contact with the Russians in 1732, Inupiaq and Yupik peoples of the Bering Straits had already adapted their masterfully designed wood latticed and gut-skin covered kayaks into an over-the-snow craft, minus the skin but plus ski-like runners to glide over snow when pulled by dogs. The average team was three dogs, with their master running ahead to guide their dogs between villages, fish camps, and hunting camps. Unlike today, teams were harnessed like a fan, with no leader.
With their long distance fur-gathering forays, the Russians brought new efficiencies to dog mushing. Teams harnessed in single file or pairs were introduced, along with the concept of a lead dog that would follow voice commands and keep the team in order. Handlebars were added to sleds. Larger teams of dogs were used, with sleds sometimes carrying passengers.
Demand for dogs and sleds skyrocketed exponentially with the gold rushes to Alaska in the late nineteenth and early twentieth century. During one of the big rushes it was said that no stray dogs could be found on the streets of Seattle, having all been rounded up and shipped to Alaska. Malamutes, huskies, and other breeds were mixed to haul freight and passengers. Unlike todays relatively small and sleek long distance racing sled dogs, the breeds of yesteryear weighed in around 75 pounds and pulled between 100 and 150 pounds.
In 1925, a daring sled dog relay through the savage Alaskan winter delivered life-saving medicine to the remote village of Nome, an event commemorated each March by the Iditarod Trail Sled Dog Race. The Iditarod sled-dog race is run on a trail that was originally a mail-supply route.
While in Fairbanks, Alaska in 2015, I was able to watch the Limited North American Championship Sled Dog Races at the Jeff Studdert Race grounds. It was a very cold day, well below zero, so the races were postponed an hour. The track for the 3-4 dog sleds was 4.8 miles long. The more dogs, the longer the track, I believe it was about 11 miles for 6-8 dogs. Look at the
frost on the dogs fur and harnesses. When I ask my little dog, do you want to go to walk, she gets so excited she can hardly contain herself. Going to walk is her favorite thing to do. These sled dogs acted the same way. They are excited when being harnessed and can't wait to run. Yes, I did get a chance to ride on a sled. The ride was quiet and fast. 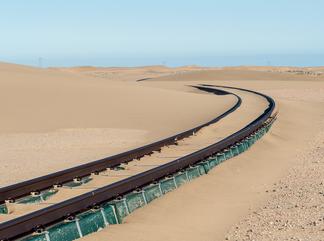 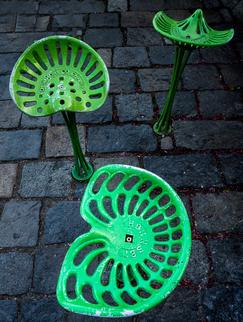 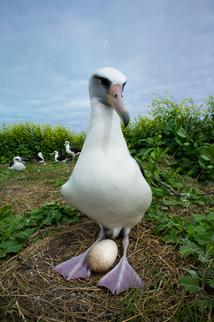 The picture of the week #14 featured a cross on Midway Atoll and gave some history such as the islands importance during WWII. This time I will not repeat the historic facts but feature what the island is today, and that is a place for the birds. The atoll was closed to visitors in late 2012 but no one told the birds.
This small 2.4 square-mile atoll, about half way between the west coast of the USA and Asia is composed of three very small islands. Today, Midway is a safe nesting and resting site for about 3 million birds.  It is home to about 70% of the Laysan albatross population and home to about 39% of the black-footed albatross. During WWII the US Navy personnel stationed at
Midway affectionately called the Laysan albatross gooney birds. While the skies and land of Midway are teaming with bird life, the surrounding waters are also rich in marine life. However I will feature the birds. Rather than select a single picture, this time I will depart from the norm and show four beautiful bird species found on the Midway Atoll.
A - To set the scene, look at picture A. This is Midway, Sand Island where albatross by the thousands are out near the runway. In recent times only a few airplanes would arrive and depart from the island. Those that did land were restricted to do so at night because of the birds. Even at night the fire truck had to go out on the runway and make the birds move before an airplane could land.
B - My opinion is not scientific, but when I was there the most prominent bird on the islands seemed to be the Layson albatross, Phoebastria immutabilis. The Layson albatross is one of the smaller albatross with a body length of about 32 inches and a wingspan of about 6 feet. It is common for this bird to pair for life with the female having her first eggs
at about 5 years of age. They can live 60 plus years. The birds on Midway have no fear of people. I literally stepped over a bird on her nest which was in the middle of a trail. I was lying on my stomach and only inches from the bird and her nest that you see here. She gave me a curious look, like who are you, but stayed put.
C - The black-footed albatross, Phoebastria nigripes, is about the same size as the Layson but less in number at Midway. These birds also pair-bond for life with their nest a simple depression scraped in the sand. The pair shown here seem to be performing a courting dance.
D - Red-tailed tropicbird, Phaethon rubricauda, is to me the most beautiful of the three tropicbird species. It is a seabird found in the Pacific and Indian oceans. It is so striking in flight with its white plumage, bright red bill, black feet and a thin red tail feather. The ones that I observed were nesting under shrubs or at the base of trees. They are plunge divers
that feed on fish and squid.
E - White Tern, gygis alba, is also called the fairy tern or angel tern. I have always called them fairy terns because the name seems so appropriate. They are solid white with a long black pointed bill. This small tern will lay its egg on bare branches or in the small fork of trees without a nest. This is unusual because terns generally nest on the ground. But, like other terns, they will fiercely defend their nest if harm approaches. I was too close to their nest so this pair protested loudly and was only a few feet above my head when this picture was taken. They feed on small fish by plunge diving into the sea. It is a long lived bird with some living more than 40 years. 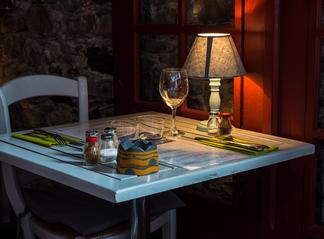 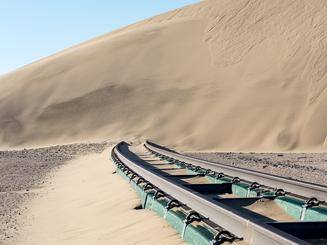 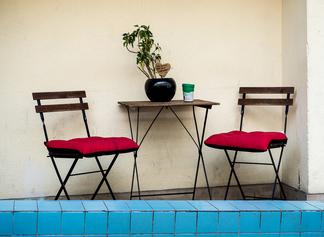 Most of what I have featured in the pictures of the week has been people, buildings, places, animals, or birds. I take a lot of pictures that nobody ever sees. I often take abstracts but realize that many people do not care for abstracts. Probably, my favorite thing to photograph is what I call the "little pictures." These often fall into the genre photographers refer to as Fine Art. The "little pictures" are part of a larger scene. In other words I am capturing only a piece of what is before my eyes. The series of "little pictures" I am showing this week all have one thing in common, and that is a chair.

A - Covered walkway between a parking lot and some buildings in Charlotte Amalie, St. Thomas U.S.V.I. I was caught in a brief heavy downpour that can occur in the Caribbean with only a minutes warning and looked for shelter until the rain stopped. I had been walking many miles so a chair caught my eye. While sitting there I noticed the shuttered window and the textures of
the wall and stone walkway. It is a study in contrast with a modern plastic chair and a centuries old stone walkway.
B - Green stools in St. Peter Port, Guernsey, UK (one of the Channel Islands). This was at a cafe near the waterfront. The green stools caught my eye so I began trying to arrange a composition. Nothing was working until I actually stood up on a table to take the picture shown here. There are two different patterns on the stools which were made by two different
companies. You immediately suspect that a flower box hangs above because of the red petals scattered on the ground.
C - Wooden table and two chairs in Lisbon, Portugal. The picture was taken from the open window of a trolley while touring the historic area of Lisbon. This was the patio of a residence and I was attracted to the blue tile and the contrasting red cushions of the chairs. The trolley was moving so I only got the one shot.
D - Table & chairs in Bordeaux, France. These two tables and four chairs were part of a large group in a sidewalk cafe. This was the only composition that I thought looked good. At first I tried to capture the scene without the three chairs in the background but the more that I worked, the more that I decided they added a base for the eye to rest before returning to the center of the image.
E - Table w/chair and lamp at Le Tourasse Restaurant on Rve Tourasse in Saint-Jean-de-Luz, France. This restaurant had not yet opened for the evening. Stools and other tables were stacked up blocking the entry. No one was around, but I managed to squeeze in and lean over to frame a number of compositions. I liked this one best with the soft light of the lamp and the
simple place settings. Notice how this European place setting differs from the place setting in the U.S.A. Europeans eat with their fork upside down and push food onto the back of the fork with a knife. No spoon is presented until coffee is served. 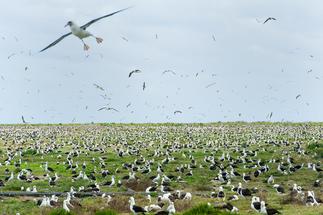 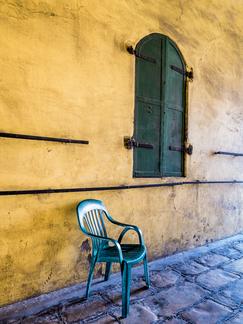 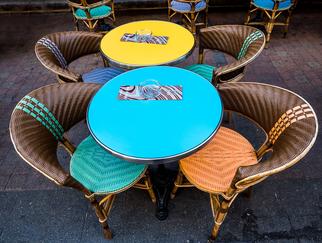